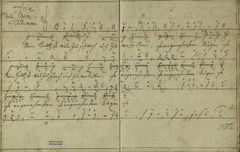 We have received the following from Helmut Lauterwasser (RISM Germany, Munich):

In 2017, numerous concerts and other events marked the 250th anniversary of Georg Philipp Telemann’s death, especially in the places where he lived and worked. In CONCERTO magazine’s first issue of 2018, there is an article about a previously unknown aria from a lost Telemann opera that was discovered in the course of RISM research last year in the Braunschweig City Archive.

While cataloging the historical collection of music manuscripts in the Stadtarchiv Braunschweig (D-BSsta) for RISM by the Munich office of RISM Germany in the summer of 2017—almost exactly 250 years after Telemann’s death—music bearing the title “Aria del Opera Telemann” was discovered within a fascicle of four leaves (see image; RISM ID no. 1001015280). The small but not quite complete fascicle contains, apart from the complete Telemann aria for voice and continuo, fragments of two further vocal works and eight dance movements, including six minuets, two of which are incomplete. The leaves of music are placed loosely together and folded in the middle, and one may presume that at least one leaf has gone missing from the center. All preserved pieces are for two voices and written in German organ tablature notation. Only one march includes notation written in three voices and at the end in four voices. The vocal piece by Telemann is the only work in the manuscript with a composer named. No composers of the dance movements have been identified yet.

The words of the short da capo aria can be traced to the opera Die königliche Schäferin Margenis, which was performed in Leipzig in 1715, and to which it probably once belonged. The opera was also performed in Bayreuth in 1716. A libretto for each of these performances has been preserved, but does not name the composer: Die | Königliche Schäferin | MARGENIS | Wurde mit | Ihro Königl. Majest. | in Pohlen | und | Chur= Fürstl. Durchl. zu | Sachsen | Allergnädigster Verwilligung | Auf dem | Leipziger Schau=Platze | aufgehführet | Jn einem | Musicalischen | Schäfer-Spiele.

Previously, only two arias in arrangements for voice and harp were known from the opera. These are preserved in a manuscript anthology known as the Musicalische Rüstkammer, dated 1719 and in the C. F. Becker collection at the Leipziger Stadtbibliothek – Musikbibliothek.

The complete article describing the discovery includes images of the source and a transcription of the aria in modern notation. See: