The Reopening of the Vienna State Opera in 1955 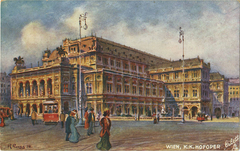 The following post is by one of our current interns, Julius Rüttger:

There is a musical anniversary that we can celebrate today: Exactly 65 years ago, the famous State Opera in Vienna reopened after World War II. The opera house, which originally opened on 25 May 1869 with Mozart’s Don Giovanni in the presence of Emperor Franz Josef and his wife Elisabeth, is still considered today to be one of the most renowned opera houses in the world.

Largely destroyed on 12 March 1945 in the last days of the war, the only parts of the once splendid building that remained were the main facade, the grand staircase, and the Schwind foyer. The opera company reopened on 1 May 1945 and performed in the Volksoper building. This opening was once again celebrated with Mozart, this time with his opera Le Nozze di Figaro. Then on 6 October of the same year the Theater an der Wien reopened with Fidelio by Ludwig van Beethoven, whose 250th birthday we are celebrating this year. It is interesting to note that the original version of this opera originally premiered there almost exactly 150 years previously, on 20 November 1805.

With a newly designed auditorium and outfitted with the latest technology of the time, the State Opera reopened on 5 November 1955, ten years after it was destroyed, with another performance of Beethoven’s Fidelio under the baton of Karl Böhm. Side note: The Austrian broadcaster ORF used the opening celebration to transmit one of the first post-war live broadcasts, at a time when there were only about 800 televisions in all of Austria.