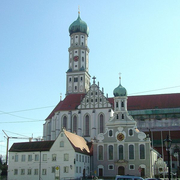 Recently we were browsing the social media site academia.edu and came across a review by Barbara Eichner of Tobias Rimek’s book Das mehrstimmige Repertoire der Benediktinerabtei St. Ulrich und Afra in Augsburg (1549–1632) (Stuttgart: Carus, 2015; the review originally appeared in Jahrbuch des Vereins für Augsburger Bistumsgeschichte [2016]). Eichner’s review pointed out a discovery made by Rimek that was new to us, though Rimek published news of his find back in 2009.

Tobias Rimek has identified the earliest source for the four-voice requiem Officium pro defunctis (LV 624) by Orlando di Lasso (ca. 1532-1594) for one tenor, a baritone, and two basses. It is a manuscript in choirbook format dating from 1575 that is located in the Staats- und Stadtbibliothek (D-As) in Augsburg (shelfmark Tonkunst Schletterer 23). This early version appears to be notated a fifth lower than in the later printed editions of the work from 1578 and 1588. The manuscript also contains the sequence “Dies irae,” which is absent from the imprints.

This source had been examined often by researchers in the past but it was always treated as an anonymous manuscript in the literature, even up to the present day. Scholars seem not to have recognized that this source was the Lasso requiem, only pitched lower. It was not consulted in the edition published in the Lasso Complete Works series in the 1960s.

Last year, a couple of projects have sought to bring more attention to this unique manuscript. Rimek published an edition of the work in its original form with Carus. A CD is also available, recorded by Capella Foccara, which performed the piece last year in concert.

The provenance of the requiem is the Benedictine abbey St. Ulrich und Afra (see image), whose polyphonic repertoire from 1549 to 1632 is described in Rimek’s book.