The following article is by Karl Wilhelm Geck and was originally published on the SLUBlog. We are publishing it here with the kind permission of the SLUB Dresden.

Once again, the digital Schranck No: II collection–with its Baroque instrumental repertoire of the Dresden Court Orchestra–has proven to be a reservoir of musical discoveries. A fascinating find was just uncovered by Michael Talbot, the British dean of Vivaldi scholarship, user of our library since 1967, and recently even an interviewee in the SLUB’s annual report (Geschäftsbericht 2013, p. 18). We would like to thank Professor Talbot for his kind permission to announce his discovery here.

Among the composers that are better represented in Schrank II is the long-time Stuttgart court kapellmeister Giuseppe Antonio Brescianello (ca. 1690 – 1757): in total, 21 of the approximately 1,750 manuscripts may be assigned to him, including a group of parts with the shelfmark Mus.2364-O-7 and the score Mus.2364-O-9, which relate to Talbot’s discovery. These manuscripts contain a three-movement Violin Concerto in E minor, which has also been handed down as No. 7 of the “XII Concerti et sinphonie … opera prima,” the only work by Brescianello that we know of that was published during his lifetime. Even when the piece was being cataloged for the Schrank II project, we noticed that Mus.2364-O-7 contains an anomalous middle movement that is clearly shorter than the corresponding movement that appears in the printed version of Mus.2364-O-9. Whereas the latter is in B minor, our middle movement is in the starting key of E minor.

Talbot has now succeeded in identifying the divergent movement from Mus.2364-O-7: it is the Adagio from Antonio Vivaldi’s Violin Concerto in B-flat major RV 366 (Il Carbonelli), transposed from D minor to E minor. It is a work that may have been composed for the violinist Giovanni Stefano Carbonelli, who was active in England, and which is also present in two copies in Schrank II. The variant found in Mus.2364-O-7 is a pasticcio, a piece consisting of already-composed works or parts of works brought together to create something new. We cannot credit the copyist of the manuscript with the pasticcio, the violist and copyist Morgenstern, but rather his “boss” Johann Georg Pisendel (1687 – 1755). It is possible that the captivating Adagio by his teacher Vivaldi just simply spoke to the legendary concertmaster of the Dresden Court Orchestra more than Brescianello’s lengthy original did. Just how closely Pisendel must have identified with the “Il Carbonelli” Adagio may be seen by the fact that he used a sort of shorthand to write the ornamentation that he envisioned on the solo part that was meant for him.

In the next issue of “Studi vivaldiani,” the yearbook of the Istituto Italiano Antonio Vivaldi in Venice, Michael Talbot will personally report on his discovery in more detail. To conclude, we might emphasize how easy this discovery was for him. While searching for concordances in Vivaldi’s oeuvre, Talbot entered the beginning notes of the “Il Carbonelli” Adagio using the on-screen keyboard of the RISM online catalog found under Advanced Search. This worldwide music manuscript database is also “fed” by the SLUB (library siglum: D-Dl): 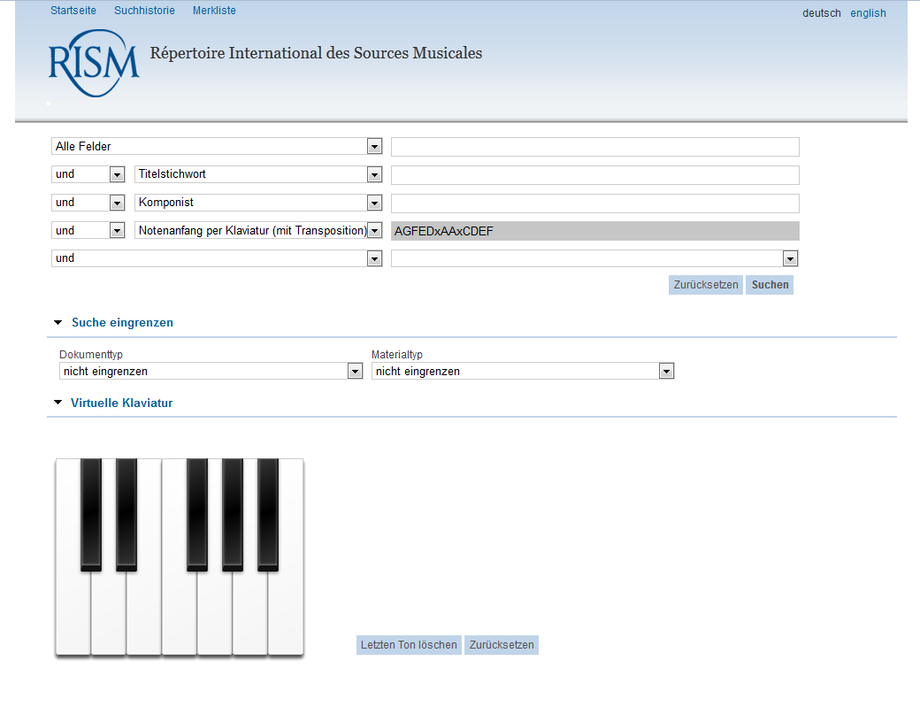 To Talbot’s surprise, the search results not only included the SLUB’s two “Il Carbonelli” manuscripts, but also the Brescianello manuscript Mus.2364-O-7. The variant middle movement was thus conclusively identified.

The discovery compellingly demonstrates what a powerful search tool the RISM online catalog is, whose incipit search is even capable of tracking down transposed themes without any effort.