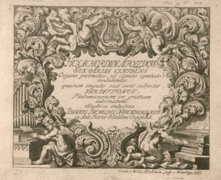 We continue our series RISM A-Z with Johann Pachelbel (1653-1706). Organists certainly do not need convincing that Johann Pachelbel wrote more than just the Canon in D! Jean M. Perreault breaks down the numbers like this in his Thematic Catalogue of the Musical Works of Johann Pachelbel: Of the 528 entries, 421 works are keyboard instrument pieces (more than half of which are for organ), 89 vocal pieces, 16 chamber music pieces (including the famous Canon), and 2 pedagogical works. The 486 Pachelbel sources in RISM reflect this distribution as well.

Somewhat surprising is the fact that only three printed editions appeared during Pachelbel’s lifetime:

Yet Pachelbel is one of the seventeenth-century composers who was never completely forgotten. An example of this can be seen in a manuscript copy of the Canon and Gigue in D, which dates from around 1840 and is today in Berlin.

Johann Pachelbel had two sons who were also composers. Wilhelm Hieronymus Pachelbel (1686-1764) was an organist in Nuremberg and Carl Theodorus Pachelbel (1690-1750) spent much of his career in the American colonies.