Bessie Lim, the First Woman Musician of Korea and her Newly Discovered Work 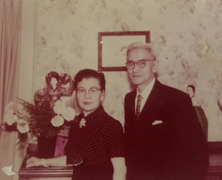 We have received the following from Dr. JeongYoun Chang (RISM South Korea):

Bessie Lim (林培世, 1897-1999) was a talented woman musician in early modern Korea. She made lots of stage appearances as a soprano and composed “Temperance Song” (금주가/禁酒歌, 1918; RISM ID no. 1001064244) when it was rare to see female composers in Korea. She was famous for her beautiful voice and a song by her was widely sung by people as a chansong-ga (찬송가/讚頌歌), a kind of hymn, in the 1920 and 30s. Before going abroad to the U.S.A., she served as a teacher at Ewha Haktang (이화학당/梨花學堂) where she had studied. Except for these facts, her exact life dates, personal history, specific activities and life after going abroad all had remained in the shade.

Dr. JeongYoun Chang recently discovered primary sources about Bessie Lim―her birth certificate, church records, school records, handwritten letters, and interviews in newspapers and magazines―and revealed that her original name is Earlsun Lim; “Bessie” might be a name given by a missionary. Furthermore, Lim deserves to be known as a pioneering woman musician in Korea due to her diverse activities as manifested by Dr. Chang’s research.

Dr. Chang took a look at Bessie Lim’s life, dividing it into four periods depending on changes in her life and places of activity. The first period is the time in Chosun (as Korea was called at the time) before she left for Hawaii in 1923, when Lim was educated at Ewha Haktang and sang on stage as a famous soprano. She sang a lot for both public concerts and events that promoted the enlightenment of women. The second period is the time from 1923 to 1928, when she was a teacher at the Korean Christian Institute (한인기독학원/韓人基督學院) in Hawaii and became a student studying voice at Oberlin College and religious education at Illinois Wesleyan University. The third is from 1928, the year of her marriage to Kyung Kim (김경 / 金慶 / Bernard Kim, 1888-1966), to 1945, the year of independence of Chosun. In this time, Lim as a musician of the diaspora supported women in Chosun and sent payments to support the independence of the country. The final period is the time after 1945, when she worked as a librarian at Long Island University and concentrated on her Christian faith while staying in New York.

Together with research about Bessie’s detailed activities, Dr. Chang also first introduced “My Bible” (나의 성경, circa 1938; RISM ID: 1001061643) as a composition by Bessie Lim, which was in the possession of her nephew as a manuscript. “Temperance Song” had been known as Lim’s sole song, but this new piece has come to light thanks to Chang’s research. This discovery is valuable because it shows how influential Christianity has been on musicians in modern Korea, and especially for women, music was a powerful tool for representing their identities.

Bessie Lim’s whole life was marked by her Christian faith and it reflects a big journey for her to find her identity in society through music. She tried to have her own voice in public by squarely looking at current situations and the problems of the time as a soprano, composer, teacher, social activist, and independence activist. With her diverse roles, she believed that music could make society better through people returning what they had learned, and she strongly recommended in a newspaper interview that “this is a ‘must-do’ for musicians.” Bessie Lim was the first musician in modern Korea, devoting herself to putting her learning and beliefs into action.