The Music Research Institute, College of Music at Ewha Womans University in Seoul, South Korea has begun to document and build a database of musical sources from Korea and East Asia thanks to a state subsidy.

Ever since Western music was introduced to South Korea at the end of the 19th century, both Western-oriented music and traditional Korean music have been represented in the musical culture of the country as two independent categories.

An extensive documentation system with digital archiving will therefore be developed.

The Ewha Music Research Institute (EMRI) recently completed a 3-year project to establish a database of East Asia’s Educational Music Documents in October 2014. The result, Ewha Music Data Base (EMDB), now showcases the EMRI’s work of collecting and digitizing music education materials of East Asia: over 12,000 items of various types of music materials are listed. Its website (eMUSICdb.info) has been open to the public since November 1, 2014. Continue…

In the news: From the First [最初] to the Best [最高]: Ewha Music Research Institute

The Ewha Music Research Institute (EMRI) is consistently gaining recognition as a hub for the study of East Asian music, namely that of China, Japan, and Korea, as it continues to embark on new collaborative research projects and organizes pertinent conferences focusing on important issues of documenting and digitizing primary sources in East Asian music. The Ewha College of Music, as the first music education institute in Korea, has led the field of Western music education and performance since its establishment in 1925. And, since its establishment in 1997, the EMRI has been diligently creating inner-connective environments in which the three important field of music (education, performance and research) are integrated through interdisciplinary approaches. Continue… 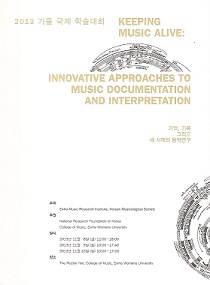 The Ewha Music Research Institute held an international conference, “Keeping Music Alive: Innovative Approaches to Music Documentation and Interpretation” on November the 8th and the 9th at the Recital Hall in the Music Building at Ewha Womans University in Seoul, South Korea. This conference facilitated prolific academic conversations about critical issues on the documentation, sharing, and interpretation of music materials. Practical issues revolving around the collecting and indexing of music documents in different societies were addressed and compared; technical issues on digitalization and database establishment were discussed; and their implications for new musicological research were elaborated. Scholars, representatives of international organizations, such as RISM, RILM, and IAML, and representatives of local music archives and libraries from ten different countries were partaking in this interdisciplinary collaboration and conversation as guest speakers. Concerts and a cultural tour pertaining to the theme of the conference were also offered on November the 8th and the 10th as affiliated programs.

The conference program can be viewed here. 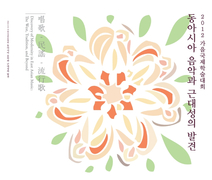 Events: 2012 International Conference at Ewha Womans University in Seoul: The Discovery of Modernity in East Asian Music: The West, Tradition, and Beyond

The Music Research Institute at Ewha Womans University in Seoul, South Korea organized an international conference from 19-20 October 2012. The title of the conference was “The Discovery of Modernity in East Asian Music: The West, Tradition, and Beyond.” Continue…