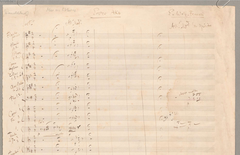 This post originally appeared on the website of the Bavarian State Library and is reprinted here with kind permission:

The works of the German-Italian composer Ermanno Wolf-Ferrari (1876–1948) have been out of copyright since the start of 2019. Wolf-Ferrari, who lived and worked in Munich for many years, became famous predominantly as a composer of operas, but also created numerous chamber music works. The Bayerische Staatsbibliothek (BSB) holds a unique collection of his music manuscripts, which can now be made available online almost in its entirety to anybody interested.

Ermanno Wolf-Ferrari, born Hermann Friedrich Wolf, was the son of the German painter August Wolf and the Venetian Emilia Ferrari. Wolf-Ferrari studied at the Akademie der Tonkunst in Munich with Josef Rheinberger. After several years in Italy, he returned to Munich. His highly successful comic operas Le donne curiose (1903), I quattro rusteghi (1906), and Il segreto di Susanna (1909), for which he is still known today, all had their premieres in Munich. After a series of serious creative crises, Wolf-Ferrari turned more to instrumental music in his later years. Wolf-Ferrari suffered heavy psychological consequences from German and Italian fascism. After the Second World War, he returned to his native city of Venice, where he died in 1948.

For decades, the BSB had been collecting material by Ermanno Wolf-Ferrari, whose life and works are so closely connected with Munich, when it scored a particularly great success in December 2000 at an auction in London: The BSB purchased a vast collection of autograph music manuscripts containing over 3,600 pages total. The Bayerische Staatsbibliothek now has a unique Wolf-Ferrari collection that also contains many unknown treasures.

The RISM catalog also includes Wolf-Ferrari’s music manuscripts and the links to the digitized objects in Munich have just recently been added.