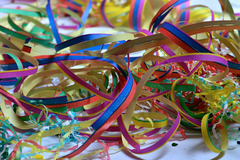 Today is Rosenmontag in our corner of Germany, the highlight of the Carnival season. It is hard to avoid colorful costumes, parades, and general revelry (in all its forms). Join us on our own parade of Carnival music through the centuries!

Carnival has been marked by its unique regional and national celebrations for centuries. Beginning in the seventeenth century, the Carnival season was the most important time of the year for opera premieres and it lasted from December 26 until the day before Ash Wednesday. The RISM online catalog offers numerous evidence for the connection between music and Carnival festivities, and today we’ll highlight a few of these pieces.

The sheer number of operas performed during the Carnival season in the 18th century is almost overwhelming. To choose but three examples:

People didn’t only go to the opera. The collection Angloisen Per ill Carnevale Nell’Anno 1781 containing 23 anonymous dances could have served in one of the numerous dance performances. Today it can be found in the Baden-Württemberg State Archive (RISM ID no. 456004036).