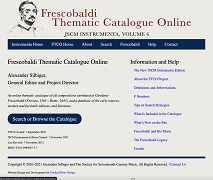 We have received the following from Alexander Silbiger (Professor Emeritus, Department of Music, Duke University):

Girolamo Frescobaldi (1583-1643) was the first major composer in the history of Western music to concentrate on instrumental music. In quantity, his surviving keyboard works far surpass those of any predecessor or contemporary; he was indisputably the most influential composer of keyboard music prior to Johann Sebastian Bach.

The Frescobaldi Thematic Catalogue Online (FTCO) provides free public access to the first comprehensive thematic catalogue and database of all his known compositions, including works of uncertain or mistaken attribution, along with all their early sources, principal modern editions, and associated literature. It contains over 900 composition records, with full-score incipits. Another particularly useful feature is the assignment of a reference number to each work included in the catalogue. These “F numbers” have since been used in several online sites, among them the RISM Catalogue, Grove Music Online, the Catalogue of Works in Frederick Hammond’s online Frescobaldi biography (2020), as well as in the final volume of the complete works edition published by the Società Italiana di Musicologia (2015) and the new Bärenreiter edition of the complete keyboard works edited by Christopher Stembridge.

The FTCO was created in 2008-2010 with the support of the Andrew W. Mellon Foundation, and during its first eleven years was hosted by Duke University. In November 2021 a substantially revised edition was published in the online Journal of Seventeenth-Century Music, becoming the sixth volume of the Journal’s Instrumenta series of databases. The new edition includes an improved interface and other new search features. Alexander Silbiger, Professor Emeritus at Duke University serves as the FTCO’s General Editor and Project Director. David Tremmel, of Trinity Technology Services, was the Web Developer of the Duke site; Chris Borgmeyer, of Crooked River Designs, was the Web developer of the new site at JSCM.