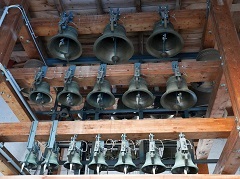 We have received the following from Pater Roman Nägele (Curator of the Art Collection, Director of the Manuscript Collection, Leader of the Music Archive, Stift Heiligenkreuz, Austria):

The carillon of Heiligenkreuz Abbey, a Cistercian monastery in the Vienna Woods, is housed in a Baroque bell tower. Abbot Franz Gaumannmüller commissioned the instrument from the firm Koninklijke Eijsbout (Asten, Netherlands) in 1982.

At first, the carillon consisted of 37 bells and was installed above the entrance to the abbey in the Hornturm tower. At the suggestion of the internationally recognized carillonneur Arie Abbenes, six bells were added in 2004. This means that the carillon has a range of three-and-a-half octaves, which makes it suitable for concert performances. The wooden playing console has a keyboard made of batons, and by striking these the 43 bells can be played by a carillonneur. A purely mechanical connection of key and clapper produces an action in a way not unlike that of a piano. A musical, lively performance is possible.

The 300th birthday of the Flemish composer Matthias Vanden Gheyn (7 April 1721 – 22 June 1785) was celebrated around the world this year.

Vanden Gheyn was from a family of bell-founders and was a virtuoso player of carillon and organ. His 11 Preludes for carillon are of particular importance. This 18th-century music is a rarity. Only a few manuscripts from this time have been preserved. Vanden Gheyn’s demanding preludes have become part of the standard repertoire for carillonneurs.

Thanks to an initiative from the Belgian Embassy in Vienna, Vanden Gheyn’s birthday was celebrated on 23 October 2021 at Heiligenkreuz Abbey.

Carillonneurs Ariane Toffel and Georg Wagner performed at this event. They were trained as carillonneurs at the Dutch Carillon Center in Amersfoort and studied with composer and University of Rotterdam carillonneur Mathieu Polak. In 2018, they were named successors to the late Wilhelm Ritter as the city carillonneurs of Aschaffenburg in Bavaria. They are also the city carillonneurs of the Bonn districts of Bad Godesberg (since February 2019) and Beuel (since 2020), the latter having a large carillon by F. W. Schilling at the St. Josef parish church.

To fit the occasion, Belgian waffles and Belgian beer were served during the concert.

Through this concert, the carillon of Heiligenkreuz Abbey participated in the international Vanden Gheyn 300 Challenge organized by the Katholieke Universiteit Leuven. The VDG Challenge has the goal of seeing at least 300 of the ca. 650 carillons that exist worldwide play works by Vanden Gheyn this year.