Release of Muscat 6.0 and Import of the Swiss dataset 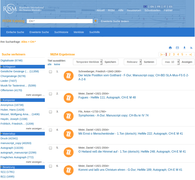 Muscat 6.0-the latest version of RISM’s central cataloging program for musical sources-is the culmination of several months of work from the development team. This new version brings many “under the hood” improvements and includes various new features.

Import of the Swiss dataset

Most importantly, Muscat 6.0 was made to merge the data independently catalogued into the RISM Switzerland installation of Muscat with the complete Central Office international dataset. Since 2009 and until December 2019, the RISM Switzerland group has catalogued its sources in a separate Muscat system. In late 2017, a project was launched to import all the Swiss data into the international dataset. Since the authority files were not originally synchronized, a large part of this project was invested into updating the Swiss data to match Central Office authority files. This was done with a combination of manual intervention and automatic systems. Considerable work had to be accomplished for converting prints that were catalogued in Switzerland before the A/I print Series was imported into Muscat. The RISM Switzerland server was taken offline for cataloguing December 14th 2019. In total, 85,642 sources were imported in Central Office Muscat installation in Berlin, of which 27,517 are new records. 2,200 new person names were added and 2,400 updated from Central Office data. After ten years of working independently, the RISM Switzerland can now catalogue directly in the international dataset. This will optimize our resources and avoid further data imports. The Swiss data is now also available in the RISM OPAC. (Use the Advanced Search with Library Siglum = CH-* to get all sources from Switzerland.)

Muscat 6.0 also contains a new Portuguese translation, which has been a new collaboration between RISM’s Central Office and the RISM Brasilian group. The translation work was led by André Guerra Cotta, who started the first translation of the RISM Guidelines in 1999 based on the old version published by the Spanish group, few years before. Seeing the Muscat interface and the guidelines in Portuguese is the accomplishment of several years. It is a historical moment and a significant step for the Luso-Brazilian musicology. We hope that this release of Muscat in (Brazilian) Portuguese will strengthen the efforts on cataloguing music sources on both sides of the Atlantic and, maybe, in other Portuguese-speaking countries. Many thanks to the RISM Brasil and to everybody in the community who contributed to this step.

Future work with the RISM Switzerland