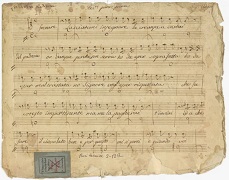 The godmother of the later opera singer Caroline Unger (28 October 1803, Vienna - 23 March 1877, Florence) was no less than the writer Caroline Pichler, who lived close to the Unger family.

Unger grew up at a boarding school. Franz Xaver Wolfgang Mozart was one of her first piano teachers and she studied voice with Wolfgang Amadeus Mozart’s sister-in-law Aloisia Lange and Joseph Mozzati. She made her debut in February 1821 as Dorabella in Mozart’s Così fan tutte. She was also part of the first performance of Ludwig van Beethoven’s 9th Symphony on 7 May 1824 at the Theater am Kärntnertor.

In 1825, she went to Italy and made her way through various opera houses to become an exceedingly celebrated prima donna by 1840. Gaetano Donizetti in particular wrote several title roles for her. An extensive list of the parts written especially for Caroline Unger as well as a lot of further information about her can be found in an article by Klaus Martin Kopitz.

In 1841, Caroline Unger married François Sabatier, a French academic, art critic, and patron, who also became famous as the translator of Goethe’s Faust. On 5 September 1841 she said goodbye to the stage in the role of Antonina in Donizetti’s Belisario in Dresden. The Sabatier-Ungers then made their palazzo in Florence into an intellectual center of the city.

The songs composed by Caroline Unger were published posthumously by her husband.