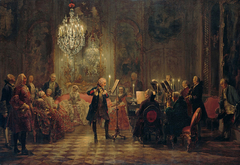 Music at the court of Frederick the Great has fascinated scholars for decades and a flury of activity arose when “Old Fritz” celebrated his tercentenary in 2012, with books, concerts, and conferences around the world. Work from our colleagues at RISM Germany even turned up an autograph manuscript by the king.

You can find works by Frederick the Great in the RISM online catalog by searching for Friedrich der Große. As a composer, he has over 100 works in the catalog, including four autograph manuscripts. A flute sonata in Frederick the Great’s own hand has been digitized and is available from the Berlin State Library (D-B N.Mus.ms. 305, RISM ID no. 464000491). If you do an Advanced Search and select the field Other names, you will find the 389 manuscripts, prints, and libretti where Frederick II is the dedicatee or otherwise mentioned on the item. Our index of printed works, A/I, contains only 2 printed editions by Frederick the Great: a lesson for a keyboard instrument (F 1984) and a sinfonia in D (F 1983; FF 1983).

Below is a Flute Sonata in E minor, SpiF 154, performed by the Accademia Ottoboni.

Center: Friedrich der Große; far right: Johann Joachim Quantz, the king’s flute teacher; left of him with violin in a long dark coat: Franz Benda; far left in foreground: Gustav Adolf von Gotter; behind him: Jakob Friedrich Freiherr von Bielfeld; behind him, looking towards the ceiling: Pierre-Louis Moreau de Maupertuis; in the background sitting on the pink sofa: Wilhelmine von Bayreuth; to her right: Amalie von Preußen with a court lady; behind them: Carl Heinrich Graun; old woman behind the music stand: Gräfin Camas; behind her: Egmont von Chasôt; at the keyboard: Carl Philipp Emanuel Bach.