A New Woman Composer is Born 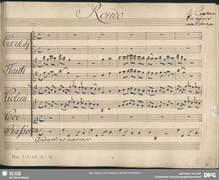 We received the following from Nina Eichholz. It originally appeared on the website Hofmusik in Dresden and is published with kind permission.

The identification could be made based on a hard-to-read annotation on the first page of the manuscript (see image) that had previously been understood differently. The note reads correctly: “di Carolina | P[rincipessa]. di Sassonia | nata di Savoya.” Maria Carolina of Savoy came to Dresden through her marriage to the Saxon prince Anton Klemens Theodor in the fall of 1781, and died there just one year later, in December 1782, from smallpox.

As a composer, the young princess was one in a long line of decidedly talented musicians from the House of Wettin, the ruling dynasty in Dresden. While the musicality of Elector Frederick Augustus II (1696–1763) and his spouse Maria Josepha (1699–1757) was particularly evident in their highly developed appreciation of the arts, having brought important musicians to the Dresden Court to cultivate music there, with their daughter-in-law Maria Antonia Walpurgis (1724–1780) from the House of Wittelsbach there was a princess at the court who also composed and performed as a singer. Her oldest son Frederick Augustus III (1750–1827) was a passionate piano player and amassed a collection of important piano music; his younger brother Anton Klemens Theodor (1755–1836) composed numerous vocal and instrumental pieces. Later on, most notably the niece of the brothers, Amalie of Saxony (1794–1870), excelled as a composer and a writer.

The sensitive aria by Maria Carolina, which is in rondò form, is the only work by the young composer documented in the RISM database so far. For more on identifications made through the Hofmusik project, please see here.