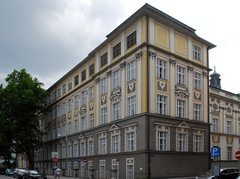 We have received the following from Ikarus Kaiser (RISM Austria):

At a secondary school in Linz, Austria (Bundesrealgymnasium Linz, Fadingerstraße), a historical music collection was discovered that dates from the late nineteenth and early twentieth centuries. This Linz Realschule is steeped in tradition, though an emphasis on a humanities-centered education that includes music might not be expected, especially when compared with other Realschulen of its day.

The school was founded in 1851 by Adalbert Stifter. The famous pianist, conductor, biographer of Bruckner and Liszt, and later director of the Musikvereinsschulein Linz, August Göllerich (1859-1923), attended the former all-boys school until graduation. The Linz composer and church musician Friedrich Arnleitner (1845-1903) was a music teacher at the school and promoted choral singing there. The school even once had its own organ. The choir director and friend of Bruckner, Alois Weinwurm (1824-1879), was also on the teaching staff.

The music collection, which is in parts incompletely preserved, goes from the mid-twentieth century backto the time of the school’s founding. It comprises approximately 70 works, mainly historical music imprints and some manuscript copies and autograph manuscripts. The collection includes works by Friedrich Arnleitner, Martin Einfalt (1858-1917), Franz Neuhofer (1870-1949), and Ludwig Paupié (1813-1864) and bears witness to the respectable music tradition at the erstwhile Realschule. RISM contributor Ikarus Kaiser has recently begun cataloging this collection for the RISM database and the first sources are already in the online catalog (RISM library siglum A-LIbrgf).