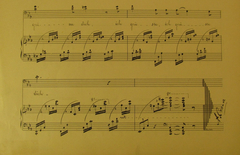 In the library of the Hochschule für Musik und Tanz in Cologne (D-KNh), nine previously unknown lieder by the Dutch composer Anna Merkje Cramer (1873-1968) were recently identified. They had been cataloged under the wrong name due to a misreading.

Cramer was a pupil of Wilhelm Berger, with whom she first studied in Berlin and later in Meiningen. She probably studied with Max von Schillings in Munich, where she later lived. She enjoyed initial success as a lied composer, publishing four collections containing songs between 1907 and 1910, but after that, biographic information about her becomes scanty. Over the next 20 years, she mainly lived in Berlin and Vienna. In 1930, her promising career came to an abrupt end due to a serious mental illness. Unhappy for a long time, she spent the last ten years of her life at a psychiatric clinic in the Dutch town of Blaricum. She died there completely forgotten. Her manuscripts, which she had deposited in a safe-deposit box in the Netherlands as a result of her feelings of paranoia, consist of autograph copies of her printed works, two additional song cycles, and several individual pieces, including two operas that were never performed. Her archive is housed today at the Netherlands Music Institute in The Hague.

The nine songs by Cramer, which were previously completely unknown, were cataloged by the Munich RISM office in February 2014 and can now be seen in the RISM online catalog.