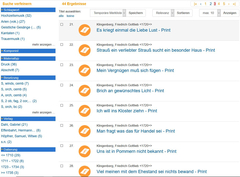 You can only find biographical information about Friedrich Gottlieb Klingenberg somewhat indirectly. There are no entries for him in the standard references works Musik in Geschichte und Gegenwart or New Grove (both print and the online versions). He is only mentioned in connection with the city Stettin (today Szczecin) and the composers Dieterich Buxtehude and Martin Heinrich Fuhrmann. Peter Tenhaef goes into the most detail about the composer and his works in his book Gelegenheitsmusik in den “Vitae Pomeranorum” - historische Grundlagen, ausgewählte Werke, Kommentar und Katalog (Frankfurt: Peter Lang 2000; cited in RISM as TenhaefG 2000).

Friedrich Gottlieb Klingenberg was born in Berlin (died in 1720, Stettin) and studied with Buxtehude in Lübeck before becoming organist at the St. Nicholas Church in Berlin. In 1699, Klingenberg held several positions as organist in Stettin (St. Jacobi and St. Johannis, and St. Gertrud beginning in 1712). He also occasionally stepped in as cantor and wrote church cantatas, motets, and arias. It was especially for this last genre where Klingenberg composed for numerous weddings, funerals, or city celebrations. The works are generally for the same instrumentation, a single voice and small orchestra (with viola da gambas and cornetts or oboes, flues, and horns). Many of these appeared in print, especially through the Stettin publishers Gabriel Dahl and Hermann Gottfried Effenbarth.

The website of the project “Gelegenheitsmusik des Ostseeraums vom 16. bis 18. Jahrhundert,” which was completed in 2013, lists 50 works by Klingenberg. The RISM catalog contains 44 records for him. Most of the printed sources are preserved in the university library in Greifswald (D-GRu). Manuscripts are at the university library in Lund and are from the Wenster Collection (S-L).

So far, modern editions that have been published appeared in the series “Das Erbe deutscher Musik” (Hochzeitsarien und Kantaten Stettiner Meister nach 1700; EDM II/6.1): Da Jesus getauft war as well as some of the wedding compositions. Further occasional compositions can be found in Tenhaef’s book named above.