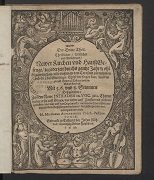 No fewer than three printed editions containing works solely by Michael Altenburg (1584-1640) were published in 1621. Tragically, this year was also a dramatic turning point in his life.

But first things first. As the son of a village blacksmith, Altenburg first studied theology starting in 1598 in Erfurt. After various jobs as a Kantor, teacher, and clergyman, he became a pastor in the village of Tröchtelborn (Thuringia) in 1610. In just a few years, Altenburg succeeded in building up a notable church choir there. This happy phase ended after he moved to Großen-Sömmerda in 1622. The population suffered from the Thirty Years’ War as well as from the plague. Not only did 600 members of his parish die from the plague, but his wife and ten of his thirteen children died from it as well.

For the three editions that appeared in 1621, Altenburg’s title pages all emphasize how the songs, variously for 4 to 10 voices, are laid out in such a way that the words are understandable and the music can be sung by the devout.