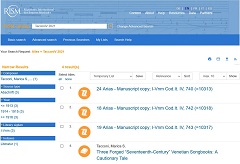 The online catalog of the Biblioteca Marciana dates the manuscripts to the 17th century (see Cod. It. IV, 740, Cod. It. IV, 742, and Cod. It. IV, 743), as does the Catalogo nazionale dei manoscritti musicali. Several scholarly studies and some thematic catalogs reference these manuscripts as 17th-century concordances or sources in their own right.

Marica S. Tacconi has now studied these manuscripts closely and describes her impressive conclusions in an article that was recently published:

Her research has shown that these manuscripts are in fact very convincing forgeries that were created between 1912 and 1916/17. While the music contained therein is authentic, the physical books are the work of one or several forgers who, working closely with several copyists and artists, took unusual pains to make the volumes appear authentic.

In her highly interesting study, Tacconi describes the three Venetian manuscripts in detail, including their contents and appearance, and presents convincing evidence that the manuscripts were actually forged. Most striking is the fact that the third to sixteenth entries in the manuscript Cod. It. IV, 740 appear in the same order as the music examples on pages 156 to 300 of the first volume of Hugo Goldschmidt’s Studien zur Geschichte der italienischen Oper im 17. Jahrhundert (Leipzig, 1901). She also points out copyist errors in the manuscripts that have been carried over to modern editions.

On the surface, the manuscripts look genuine but they are, at their core, counterfeit. This might not seem important at first glance because the music is authentic. Only when they are viewed as authentic Venetian products of the 17th century might one believe that the music of composers from Florence or Rome was widespread in Venice at the time.

We can’t republish images from the article, but click through to the article to view some rich illustrations from the manuscripts’ pages.