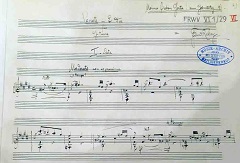 We have received the following from P. MMag. Roman Nägele OCist, director of the music archive at Stift Heiligenkreuz:

Over 600 works from the archive of the Austrian composer, pianist, and conductor Ferdinand Rebay (1880-1953) can be found at the music archive of Heiligenkreuz Abbey. They are also listed in the RISM online catalog through the siglum A-HE.

The Brazilian guitarist and Rebay scholar Luiz Mantovani, in his dissertation “Ferdinand Rebay and the Reinvention of Guitar Chamber Music,” calls the composer a “pioneer among the non-guitarist composers who started to write for the guitar in the 1920s.” Heiligenkreuz Abbey preserves the original manuscript of the 2nd Sonata in E major for solo guitar, which Rebay composed for the birthday of his niece Gerta Hammerschmid (1906–1985) in 1941 (RISM ID no. 600092129).

Luiz Mantovani chose the abbey’s Kaisersaal as the location for his recording. It was filmed from 17–20 January 2022. The occasion marked the first recording of the piece and likely even its first performance in 80 years—it is uncertain whether Gerta Hammerschmid played it in public.

Hans-Ulrich Holst and Christoph Binner of Fibonacci-Film (Hamburg) carried out the project. It was made possible by the Hermann Hauser Guitar Foundation, Munich. Thanks to this and Luiz Mantovani, a major solo sonata by Ferdinand Rebay was captured on film.

Image courtesy of the author.