From Everyday Goods to Cultural Goods: The Music Archive of the Cistercian Abbey of Stams, Austria 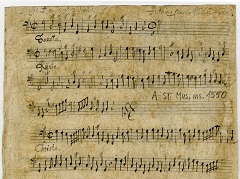 Stams Abbey was one of the most important musical centers in Tyrol in the 17th and 18th centuries. The Stams Abbey Music Archive still bears witness to this today. The music materials, once used to organize the everyday musical life in this monastery, underwent a transformation over time from everyday objects to the national treasure that it is today.

Image: Beginning of the basso continuo part (ca. 1670?) to a mass, preserved only in Stams, by Paul Kienhaimer, a highly regarded cornett player from the Innsbruck court music chapel around 1620/30 and 1640/50. Manuscript in A-ST Mus.ms. 1550. Image courtesy of Archiv ITMf.

On March 12, 1273, Cistercians from Kaisheim near Donauwörth settled in the monastery of Stams, which had recently been founded by the Tyrolean ruler Duke Meinhard II and his wife Elisabeth from the House of Wittelsbach. From the beginning, Stams enjoyed an outstanding position among the monasteries in Tyrol: the abbey served as royal burial grounds, it was economically strong for a long time, it was a steady meeting place for the political, social, and religious high society, and it was a desirable place to send children to school. The functional specifics of any institution affect its cultural life, especially as regards the role of music. Consequently, music was strikingly present in the Stams liturgy as prescribed by the Roman Catholic Church in general or the Cistercian Order in particular, all in accordance with the currents or fashions of the time. The collegiate church had two patron saints, St. John the Baptist and the Assumption of Mary, as well as the relic of the Holy Blood and the image of Our Lady of Good Counsel. In Stams, music was played in all its variety for representation and in reverence to important visitors, for the personal enjoyment of the conventuals, together with fellow members of the monastic community, staff, and guests, and privately. Here, music shaped the personal development of young people entrusted to the monastery for upbringing and a comprehensive musical education; the musical participation of boys in church services or on the theater stage was a matter of course. Similar outlines of these monastic musical activities can be found in many places. Stams, however, occupies a special position because it became one of the most important musical centers in Tyrol, and was at a demonstrably very high level during the 17th and 18th centuries.

The most detailed information about such musical activities can be found in the unusually rich collection of music materials in the monastery, which has been preserved through fortunate circumstances. The music, once used in the everyday sacred and secular musical life in this monastery, underwent a transformation over the centuries from common material objects to a valuable cultural asset of the highest order. It became an irreplaceable storehouse of knowledge. Written musical sources in Stams Abbey date back to the 11th century, even to the time before the monastery was founded.

The music manuscripts and printed music editions in the Stams Abbey Music Archive contain sacred and secular music, with an emphasis on the 18th and 19th centuries. Numerous pieces are preserved only in Stams and are of importance for both regional and European music history. The composers represented are from the Austrian-German area, Italy, France, the Netherlands, and also from Tyrol, not least from the Stams Convent itself. In Stams, unique sources on the history of the symphony, church music, and chamber music can be found in abundance, as well as, for example, the decisive piece of evidence that led to the conclusive identification of the real composer of the “Toy Symphony” in 1996, namely the Tyrolean Benedictine Edmund Angerer from Fiecht Abbey, not Josef or Michael Haydn or Leopold Mozart, as had been assumed until then (A-ST Mus.ms. 110). The Stams Abbey Music Archive surely still holds a number of sources that – each considered its entire context – should allow future additional correct attributions of works for the first time, especially considering the numerous pieces with questionable authorship in the 18th century. 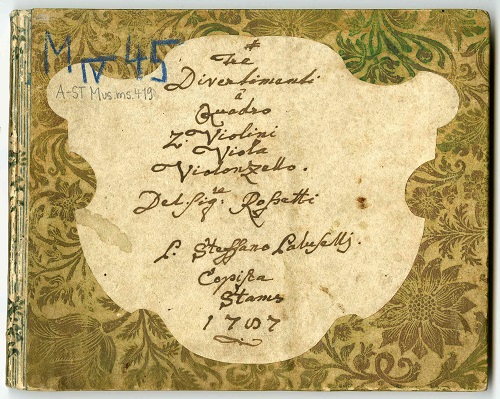 The scholarly cataloging of the music archive of Stams Abbey makes it possible for any interested person to view the ca. 8,370 records from Stams in the RISM online catalog and form their own picture of the musical life of the abbey (https://rism.info/, library siglum: A-ST; as of April 2021). This also includes other music institutions from which documents are preserved in Stams, whether they were transferred there deliberately or by chance. Cataloging work is ongoing, and eventually the RISM catalog should contain more than 9,000 records for Stams.

The RISM catalog constitutes the world’s best optimized portal for publishing source descriptions from Stams Abbey. It currently contains a total of over 1.2 million records for music manuscripts and printed music editions. Online updates take place every four to six weeks that enhance older records, create new ones through ongoing inventory projects, or add digitized sources. The Editorial Center of RISM (Répertoire International des Sources Musicales/International Inventory of Musical Sources) in Frankfurt am Main, which has been in existence since 1952, works together with the RISM Digital Center in Bern, the Bayerische Staatsbibliothek in Munich, the Staatsbibliothek zu Berlin Preußischer Kulturbesitz, the Akademie der Wissenschaften und der Literatur in Mainz, and regional RISM offices in more than 35 countries around the world. The international network of RISM contributors brings unique advantages for all participants with regard to the approach used in source documentation, the publication of the descriptions, and their wide-ranging use.

Since the diverse musical sources from Stams represent both cultural monuments of international importance and a legacy of the impressive Tyrolean musical tradition that must be responsibly preserved, suitable and careful documentation can be carried out with financial support from the cultural department of the Tyrolean government, and through this a fundamental step towards preserving the collection for the future can thus be secured. The work for Stams is entrusted to the musicologist Hildegard Herrmann-Schneider from the office RISM Tyrol-South Tyrol & OFM Austria based at the Institute for Tyrolean Music Research (www.musikland-tirol.at). 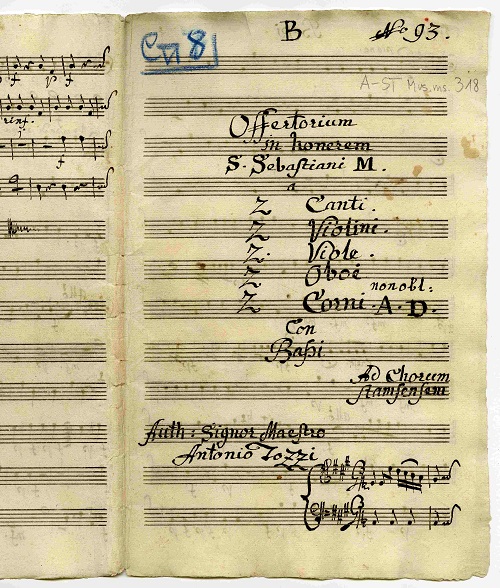 Image 3: Title page to the offertory “Christi martyr” by Antonio Tozzi (ca. 1736 - after 1792), an opera composer from Bologna who was celebrated in Munich in 1773/75. It is probably arrangement from a questionable opera by Tozzi. Manuscript copy in the hand of P. Stefan Paluselli OCist, ca. 1775. Shelfmark A-ST Mus.ms. 318. Image courtesy of Archive ITMf. Compositions in honor of St. Sebastian have been documented in Stams since 1636, when the plague was raging in Tyrol. The painter Paul Honegger (d. 1649, Innsbruck) delivered a new altarpiece for the collegiate church depicting the three plague saints St. Sebastian, St. Roche of Montpellier, and St. Anthony (the hermit), as well as the Stams convent as it submits to their protection (Kunstsammlungen Stift Stams, inv. no. 298; see illustration in Herrmann-Schneider 2020, p. 201).

In addition to the source descriptions in the RISM catalog, several studies treating detailed questions of the Stams music tradition have been published, catalogs of works have been enriched with often-unique documents from Stams, modern music editions have been issued, and the Institut für Tiroler Musikforschung in Innsbruck has systematically made the sonic landscape of the Music Archive of Stams Abbey accessible to everyone through exemplary concerts and CDs (including the special CD series “Musik aus Stift Stams”) and online in Klangraum Tirol (at www.musikland-tirol.at). The book publication Wo die Engel musizieren. Musik im Stift Stams (Brixen: A. Weger 2020) by Hildegard Herrmann-Schneider presents the musical activities of Stams Abbey, sacred and secular, and traces the once prominent position of music in this place from the 14th century on, also taking into consideration the extraordinarily numerous works of visual art with music motifs.

This article was first published on the website of the Bereich Kultur und Dokumentation der Ordensgemeinschaften Österreich.