The Music Collection of the Church of St. John the Baptist in Teplice, Czech Republic 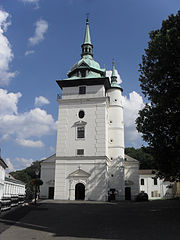 We have received the following from Ludmila Mikulášová (RISM Prague):

During the 18th and 19th centuries, Teplice was an important spa town visited by many European celebrities and crowned heads (for example, Tsar Peter the Great in 1712; the Swedish King Gustav IV in 1804; the Prussian King Frederick William III, 1812–1839) and distinguished artists. In 1812 Johann Wolfgang von Goethe and Ludwig van Beethoven first met here. In addition to Beethoven, the spas in Teplice were also visited by Frederic Chopin, Robert Schumann, Franz Schubert, Richard Wagner and Carl Maria von Weber. Important guests continued to come to Teplice through the second half of the 19th century, giving the town the moniker “Little Paris”.

In this context, an important source for learning about the rich musical history of Teplice is the unique collection of music from the parish church of St. John the Baptist (RISM library siglum: CZ-TEk), which documents the church repertoire and the high level of musicality of the local population from the early 18th to mid 20th centuries. This is a remarkable collection of about 1,500 pieces of music, which I have been entering into the RISM database since 2016 thanks to the institutional support of the Ministry of Culture of the Czech Republic to the National Library of the Czech Republic within the long-term conceptual development of the research organization, Area 2: Musicology.

The oldest dated piece of music is the Vespers of Šimon Brixi from 1721 (original shelfmark No 413). Most of the collection, however, consists of works by German and Austrian composers. These consist mainly of numerous copies of works by J. Haydn, W. A. Mozart, and L. v. Beethoven, who we celebrated in 2020 on the occasion of his 250th birthday. He is represented by copies of Christ on the Mount of Olives op. 85, Mass in C major op. 86 (3x) – these copies coming from the first half of the 19th century – and a printed edition of Wellington’s Victory op. 91 (Vienna, S. A. Steiner und Comp, [1816], No 2367). This is natural, since Teplice was at the time in the German socio-cultural orbit and the residents were primarily Germans and German-speaking Jews.

The collection also includes a great number of sacred compositions by L. Cherubini. From the 18th century there are Latin and German contrafacta of arias and choruses from Italian operas. Most are from operas by J. A. Hasse. These are dramatic musical works composed for Dresden, or which were performed in Dresden (Cleofide 1731; Siroe re di Persia 1733; Didone abbandonata 1742; Antigono 1743; Leucippo 1747; Demofoonte 1748; Attilio Regolo 1750; Ciro riconosciuto 1751; Adriano in Siria 1752). It can be assumed that these copies were obtained from Dresden sources shortly after the local performances, as was customary at the nearby Cistercian monastery in Osek.

Also preserved in the Teplice collection are contrafacta of opera arias by G. Bonno (arias from the opera Il re pastore, 1751) and B. Galuppi (arias from the opera Arminio, 1747, mistakenly attributed to Hasse). Most of these contrafacta were owned in the middle of the 19th century by the Teplice choir director Joseph Rohn. These arias were repeatedly performed in Teplice in the 1840s and 1850s, as evidenced by the annotations on the singing parts, newly acquired at that time. The performance of these demanding vocal parts testifies to the high level of skill of the local singers.

Czech composers are represented in the collection to a lesser but not negligible extent. Most surviving compositions are by F. X. Brixi (31) and V. Maschek (2 autographs, 27 copies). The copies of Maschek’s compositions are extraordinarily valuable since most are dated, making it possible to determine the approximate time these works were created. Others include, for example, copies of the works of A. Laube (10) and J. A. Koželuch (8). Also preserved is the extensive music collection of Teplice choir directors: Josef Groh, a native of Rumburk (1815-1881), and his son, Josef Groh Jr., who worked in the second half of the 19th century. Their legacy numbers 138 items – autographs, copies and sketches of sacred compositions, and includes numerous school exercises and practice compositions made by Josef Groh, Jr., while studying at the Prague Organ School.

The collection even includes several dozen anonymous pieces and fragments. Thanks to the RISM database I have already been able to determine the authorship of 47 of them. This is an important Central European collection of sacred music that gives us an idea of how sacred music was performed at an important spa town in the 18th and 19th centuries.

Image: The Church of Saint John the Baptist in Teplice, by Qwertz0451, from Wikimedia Commons (CC0 1.0).