Music in the Convent of St Adalbert's Abbey in Staniątki, Poland 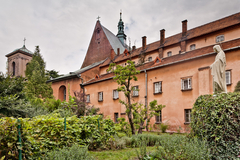 Marcin Konik (RISM Poland) has completed a project that investigated the music of the Benedictine Monastery in Staniątki, Poland (PL-STAb), resulting in 250 new records in the RISM database. The RISM records were entered by Ludmiła Sawicka. Here is a summary of a newly published article that reveals more about musical culture at this monastery:

Over the centuries, the rich musical culture of the convent at the Benedictine Monastery in Staniątki took a variety of forms. The foundation of musical life was always the sung Officium. As one of the nuns wrote:

“We have proven that in a Benedictine convent the maintenance of a choir, which implied the solemn singing of the breviary was the first duty of the convent. In compliance with the celebrations of the church year and in accordance with the content arrangement of the Benedictine breviary used by the nuns of Staniątki, all feasts of the Holy Virgin Mary are at times celebrated very solemnly .”

The main aim of the article is to show different examples of how musical life of the abbey looked like during the centuries.

What remains an extremely interesting issue is the matter of the possible engagement of nuns in the performance of vocal-instrumental music by an ensemble. The practice of such solutions in Polish Benedictine convents has been confirmed by research on other monasteries. In Sandomierz, for instance, in the 18th century there was a group of nuns who was accepted to the convent without a dowry but on account of their musical talents. What is more, the rhythm of their day diverged slightly from the rhythm of the day of other nuns — they were sometimes released of canonical hours to be able to prepare themselves for the performance. We, unfortunately, do not dispose of data that would authorise similar conclusions with regard to the customs of the Staniątki nuns. However, if we combine certain facts, we may assume that, like in Sandomierz, nuns could actively participate in performing vocal-instrumental music.

The article was written as part of a research project funded by Narodowe Centrum Nauki (National Science Centre Poland), grant no. 2011/03/D/HS2/01824.

Image : The Benedictine Monastery in Staniątki by Piotrekwas, from Wikimedia Commons