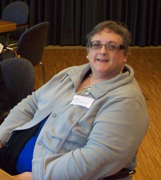 We were saddened to hear of the unexpected death of Cheryl Martin on July 15, 2016. Cheryl was the leader of the RISM Canada working group, which she took over in 2011 following William Guthrie’s retirement.

Cheryl was a librarian at Western University in Ontario. Her cataloging expertise was always available for quick questions or longer considerations of issues such as the structure of data for our RISM Series C directory. In her first year with RISM she established an overview of Canadian musical resources and plans for including them in RISM. This she shared with us at our conference Music Documentation in Libraries, Scholarship, and Practice in Mainz in 2012 and at the IAML conference in Montreal that same year.

As working together with RISM progressed, Cheryl began an initiative to organize data transfers from Canadian libraries for materials that were already cataloged in local or national catalogs but not yet in RISM. Results using a small sample of test data were promising and could be evaluated in early test versions of our cataloging program Muscat. The pilot project was presented at the IAML congress in New York in 2015. We were hoping that this project would be expanded to other libraries in Canada, and eventually even to other RISM national groups. For the RISM database, Cheryl’s most significant contribution was cataloging Mahler manuscripts from the Gustav Mahler-Alfred Rosé Collection at Western.

A memorial service was held for her at Western last month, and the New York State-Ontario Chapter of the Music Library Association remembered her at their meeting in October.

We are sad to say goodbye to Cheryl and we hope that RISM work in Canada can continue in her memory.