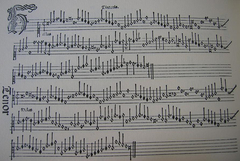 Not much is known about the life of Johannes Tinctoris, although he was the most famous music theorist of his time. What is known is the year of his death, even if the exact date is unclear: Tinctoris died before 12 October 1511—500 years ago.

This son of a magistrate was born Jehan de Taintenier around 1436 in Braine-l’Alleud, Belgium. For four months of 1460, he was employed as petit vicaire at the Cambrai Cathedral, where he most likely met Guillaume Dufay, the cathedral’s maître des petits vicaires. In 1462-1463, Tinctoris was registered as succentor at Orléans Cathedral; at some point soon after, he spent seven years at Chartres Cathedral as (by his own account) director of the choirboys.

Tinctoris spent a large part of his life in Naples. He went there in the 1470s and was employed as a singer and chaplain at the court of Ferdinand I. Apart from that, what we know is that he stayed in Ferrara (May 1479), sought to recruit new singers for the court (1487), petitioned the Pope to bestow upon him a doctorate in canonical and civil law (1490), and had a stay in Rome (1502). It is unclear when Tinctoris finally left the Aragonese court. He possibly visited a former pupil of his, Beatrice of Aragón, daughter of Ferdinand I and Queen of Hungary, in Buda in 1493. In Nivelles, near his place of birth, he held the post of canon. Since payments related to this position ended each October, at which time a new canon was appointed, 1511 has been accepted as Tinctoris’s year of death.

In stark contrast to Tinctoris’s theoretical works, very few of his compositions are extant. A few of them are in recorded RISM’s online catalogue. Tinctoris wrote mostly sacred and secular vocal works, including multiple masses, motets, and chansons. Some appeared at the beginning of the 16th century in collections published by Ottaviano Petrucci in Venice, including “Helas le bon temps,” which was included in the very first published musical collection, Harmonice Musices Odhecaton (RISM B/I 1501)—but it is missing from the only surviving source (I-Bc) of this work. It exists, however, in the 1504 reprint (RISM B/I 15042). It is generally unclear how many works by Tinctoris are lost.

Of the thirteen known treatises by Tinctoris, one is lost (Speculum musices) and one is available only in fragments (De inventione et usu musice). Tinctoris wrote his music-theoretical works mainly in Naples; copies have also been preserved in Spain and Belgium. His writings addressed topics in the areas of mensuration pedagogy (including note and rest lengths, perfection/imperfection, ligatures, chromatic alteration, proportions, dots, etc.), the modal system, the Guidonian hand, and counterpoint, as well as the origins and effects of music.

Between 1472 and 1474, Tinctoris wrote a dictionary called Terminorum musicae diffinitorium_ for his pupil Beatrice of Aragón, which is possibly the first dictionary of musical terminology (RISM B/VI). It was published around 1495 and comprised 28 printed pages. It was his only complete theoretical text to come out in his lifetime. The first German translation appeared in 1863 by Heinrich Bellermann and was reprinted in 1983 along with a facsimile of the incunable by Peter Gülke. A modern English translation by Carl Parrish appeared in 1963.