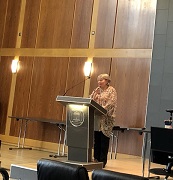 The following is by Pia Shekhter (President of IAML, the International Association of Music Libraries, Archives and Documentation Centres) and originally appeared on the IAML website. It is reprinted here with kind permission.

An international conference was held 7-9 October 2022 acknowledging the 70th anniversary of RISM (Répertoire International des Sources Musicales). It took place at the Akademie der Wissenschaften und der Literatur in Mainz, Germany. Around one hundred musicologists attended the conference online, and more than sixty in person. It was a great honour for me to extend IAML’s warm congratulations in a short speech at the opening session. As the President of IAML, I am very proud of the fact that our Association was one of the two founders of the RISM project in 1952, together with the International Musicological Society (IMS). Our histories have been closely intertwined ever since, and RISM continues to work under the auspices of IAML and IMS, supported by a Commission Mixte delegated by these two professional associations. Together with the Board of RISM, the Commission Mixte forms the executive committee that determines the strategic goals of the organization. IAML is represented by Mathias Auclair, Paris (France); Beatriz Magalhães Castro, Brasilia (Brazil); Rupert Ridgewell, London (UK); Barbara Wiermann, Dresden (Germany) and Sonia Wronkowska, Warsaw (Poland).

The Conference had the overarching theme “Musical Sources: Past and Future”. The programme was rich and varied. Some of the contributions centred on the project itself – its history and traditional scope, while others were focussing on potential new paths. The organisers’ ambition was that “the conference should prompt participants to reconsider what we regard as ‘musical sources’ and to scrutinize the diverse methods used for studying them in both the past and the foreseeable future”. Traditional source types would be music manuscripts, printed anthologies and editions by single composers, theoretical treatises and more. New musical sources could be music-related ephemera, digital files and audio-visual materials. One of the many interesting presentations had to do with mining RISM data for new music historical insight.

The sessions were grouped under the following sub-themes: Fragmenta, Codices, Libri; Special Challenges; Beyond Europe; New Source Types; Historical Perspectives and the Digital Turn. At the start of the RISM project there was a debate about whether to target only European music sources. The decision was to also include non-Western sources and RISM today covers music from the Arabic world to Ibero-American sources, as well as the music of South Korea. The RISM Lecture that followed the official opening of the conference presented musical sources in Mexico.

RISM grew out of a need to create a comprehensive inventory of musical sources after the end of World War II, when many libraries had been fully or partially destroyed and important collections had been relocated. IAML and RISM are firmly rooted in our respective histories, but have at the same time adapted well to the challenges of the digital era. RISM’s vision is ”Knowing what exists and where it is kept”. The freely accessible RISM Catalog and the newly inaugurated RISM Online, with more than 1.4 million records, are truly impressive. Apart from the increasing number of records in the database, there is the ongoing work to improve the catalogue through technical developments, expansion of authority data, refined incipit search, etc.

I took the opportunity to thank the RISM working groups in more than 35 countries for their dedication to this global project, with a special thank you to the Greek RISM working group, which recently completed the report of their IAML Project Group on RISM Series C, dealing with authority records for institutions. I also paid tribute to the devoted staff of the Editorial Center in Frankfurt, as well as to the major German libraries in Berlin, Munich and Dresden; the RISM Digital Center in Bern and other international institutional partners. Finally, I expressed heartfelt gratitude to the Mainz Academy and the German Union of Academies for the ongoing and generous support that RISM has received as part of the Akademienprogramm, since 1980. The support will end in a few years and much work is now going on to find financial solutions that will guarantee a sustainable future for RISM - a project that is invaluable for music scholars, musicians, librarians, students and others, around the world.

When IAML celebrated its 70th Anniversary in 2021, IAML held its annual congress for the first time online, and it was not so easy to create a festive atmosphere. The videos with cordial greetings from the representatives of RISM, RILM, RIPM and RIdIM were therefore especially welcome. It was striking that all of them used the family metaphor to describe the intimate relationship between IAML and the R Projects, among which RISM is the oldest sibling. The next issue of IAML’s scholarly journal Fontes is dedicated to the RISM anniversary and offers several articles, guest edited by the President of RISM Germany, Nicole Schwindt.

We are living in distressing times and are reminded of the importance of culture in people’s lives. IAML and RISM will continue to work internationally with safeguarding the musical heritage of the world. What a noble mission!

Image: Pia Shekhter speaking at the opening of the conference. Photograph courtesy of RISM.