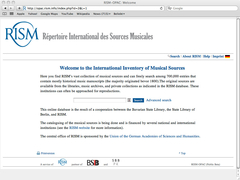 A new music catalogue has been freely available online since June 2010. This database offers around 700,000 sources, mainly in manuscript, catalogued in detail according to academic criteria. The manuscripts are currently housed in hundreds of libraries and archives around the world. They pass down to later generations the musical works of 30,000 composers.

Even though there has been music printing for 500 years, manuscripts remained an integral basis of musical legacy until well into the 19th century and much - whether opera, symphony or sacred music – was never printed. RISM has set itself the task of making this vast resource accessible for music research and practice, and its database, compiled by researchers in over 30 countries, can now be accessed free of charge on the Internet. Many of the sources catalogued by libraries and archives in these countries were recorded for the first time in the course of this project and are only now available to a wider public.

The catalogue entries include information about the composers (including dates of birth and death), title, instrumentation and cast of characters, as well as references to the works in musicological literature. The manuscripts themselves are described in detail in respect to scribe, location, and date of origin. In addition, practically every work can also be identified unambiguously by means of a music incipit – that is, notated excerpts from the beginnings of the most important parts.

The database provides information not only about the dissemination of works by composers who are still well known today, but also a wealth of knowledge about those many creative musicians who were highly regarded in their time but are little-known today or even forgotten. This makes the database invaluable for music historians and also gives performing musicians opportunities for “excavations” and rediscoveries.

A variety of search fields makes it possible to search not onlyparticular composers, titles or performing forces, but also by place and time of origin or various people like librettists, previous owners or dedicatees.