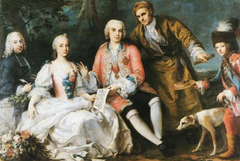 Carlo Broschi (1705-1782), known to most people as Farinelli, was the celebrated Italian castrato who was widely admired all across Europe. RISM has around 150 sources mentioning him as a singer, including arias, operas, duets, and a cantata. Farinelli also composed a little: there are nine pieces attributed him in the RISM catalog and two printed works of his in A/I (B 4593 and BB 4593a). They include arias, solfege exercises, opera insertions, and a piece called Regal Brittania that Farinelli wrote upon leaving London in 1737 to go to the court in Spain.

The last castrato was Alessandro Moreschi, who died in 1922, but he is the only castrato of whom there are recordings available. Compare his voice with the voice synthetically produced for the 1994 movie Farinelli, which was engineered by combining the voices of a soprano and a countertenor.