We have received the following from Inês d’Avena and Claudio Ribeiro:

During an artistic residency in Venice in October 2018, we discovered a handful of eighteenth-century anonymous manuscript sonatas for recorder and basso continuo at the library of the Conservatorio “Benedetto Marcello”. In the Fondo Correr, Esposti e provenienze diverse – containing, among others, manuscripts stemming from the Ospedale della Pietà – we found the Sonata per Flauto in F major, I-Vc Correr Busta 127.46 (RISM ID no. 850729277), which we instantly suspected to be an unknown work by Vivaldi. A CD recording and release immediately followed [see note 1], and by November 2020 two editions of the work were available (digital and print) [see note 2]. Now our research and reasoning in attributing this sonata to Vivaldi can be read in the article “A newly discovered recorder sonata attributed to Vivaldi: considerations on authorship” [see note 3]. The article presents our study on the paper and rastrography of this newly discovered sonata, as well as a comparative study of material from Vivaldi’s oeuvre and Correr 127.46, with a glimpse at the other composers who are in some way connected with the style of Vivaldi and the context of the sonata in question.

In short, we were able to establish that the paper of Correr 127.46 is of Venetian origin, and of a type used by Vivaldi. It features the typical tre mezze lune watermark, with the countermark “A Z” surmounted by a trefoil with stem. We can also be fairly certain that the scribe was a Venetian involved in copying as a professional activity. Thanks to the study of the paper and a match of the cross-section of the rastrography with that of another manuscript, we have been able to ascertain a more precise dating of the music paper used and infer the date of copying of Correr 127.46 to c. 1733.

Already in our first reading of the piece we had observed several typical features of Vivaldi’s known works. Vivaldi’s compositional practice involved a combination of recycled material previously composed with fresh inventions, creating often radically different contexts for the same or similar musical material. The study of the textual and non-textual elements of this manuscript indeed confirmed several characteristics typical of Vivaldi’s idiolect: the use of specific melodic concordances allied to the frequent use of tripartite phrase structures, extensive use of the 5-6 sequence (with little or no variation and including a melodic descent to the leading note in the upper line at the end) often combined with arpeggiation, a simple driving bass that shapes the structure and contributes rhythmic and harmonic support rather than contrapuntal interplay, and the elaborated prolongation of the final chord of a section etc. The empirical observations we had initially made are substantiated by a great number of concordances and parallels with works by Vivaldi: Correr 127.46 bears similarities and over one hundred concordances with works dated between 1700 and 1740, a period spanning Vivaldi’s entire career. A considerable selection of these concordances is exemplified in the article – including, among many others, RVs 178, 429, 758, and 806. Placing the whole of Correr 127.46, with all its stylistic traits within the oeuvre of Vivaldi, we postulate that it is likely to be a composition of the 1710s copied in the 1730s. 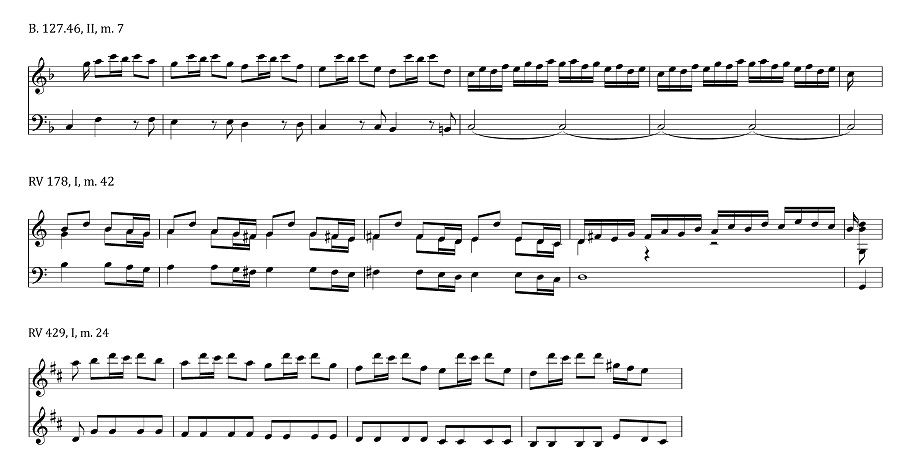 Lastly, before concluding, the article takes a ‘devil’s advocate’ detour to look at possible composers other than Vivaldi for Correr 127.46. Vivaldi was naturally deeply embedded in the fabric of his time and so was his musical writing. However, he was also a great innovator with a strong musical personality, and his works and the spirit of his music were heavily paraphrased, copied, and plagiarized as his fame swept through Europe. For the purpose of the attribution of Correr 127.46 to Vivaldi the discussion was limited to those few composers whose style bears strong resemblances with Vivaldi, and whose extant output includes sonatas, so that we could make as direct a stylistic comparison as possible. Aspects of the compositional styles observed in the sonatas of Diogenio Bigaglia, Gaetano Meneghetti and Ignazio Sieber are contrasted with what can be observed in Vivaldi in general and with the particularities observed in Correr 127.46, clarifying why Vivaldi is the most plausible composer for this sonata and demonstrating why we stand by our attribution.

Incipits from the recorder sonata from the RISM catalog; other images courtesy of the authors.