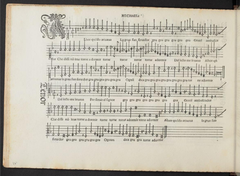 The following first appeared in Bibliolore – The RILM Blog and is reproduced here with kind permission:

In 2019 A-R Editions published Michele Pesenti: Complete works, a critical edition produced by an editorial team including a musicologist, a linguist, and a musicologist-performer.

While earlier musicologists assumed continuities between frottola and madrigal, more recent scholarship has refuted this idea: they were two different genres, cultivated in different centers of patronage, by different composers, and for different audiences. Pesenti, however, composed in both genres thanks to changing professional circumstances. He composed frottole while working in Ferrara, and later, when he secured an appointment at the court of Pope Leo X, he (or someone acting for him) refashioned several of his frottole as madrigals: Textless lower instrumental lines are provided with text, converting a composition for a vocalist with instrumental accompaniment into one for an ensemble of four vocalists.

This pioneering edition of Pesenti’s complete works offers parallel editions of compositions existing in both these forms, as well as compositions for solo voice and instrumental consort that were later arranged for voice and lute. It further seeks to clarify the procedures used in expanding the abbreviated presentation of the frottola’s texts and music into readily performable forms.

Above, a page from an early edition of Pesenti’s Dal lecto me levava; below, a recording of the work.