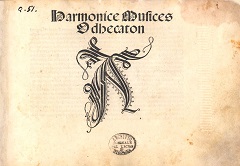 It all began with the famous first Petrucci edition from 1501 (see image). After around four years of editing, all of the entries from B/I, Recueils imprimés, XVIe-XVIIe siècles (over 2,700) have been revised and can be found in the RISM catalog. As with all records in the RISM catalog, each record from B/I has a unique RISM ID number, though the original B/I numbers are included as references.

We reported on different stages of the project here:

If one wishes to somehow summarize these 200 years of print history, one could speak of the era of typography with movable type. Of course there are exceptions, and they only increase in the 17th century—see the example described in Music History’s Earliest Engraved Notes – Simone Verovio.

The places of publication found in these editions are also varied. While we encounter many anthologies from Italy or German-speaking regions quite often at the beginning, we soon start to see more and more publications from Paris, Antwerp, and London. It comes as no surprise then that the very last B/I entry is an engraved London edition. The example seen below, on the other hand, is a Parisian edition from the same year set with movable type. It shows a further tendency: towards the end of the 17th century, more and more anthologies of a periodic character were published. Through regular deliveries, current pieces of in-demand genres and composers could circulate. This continued into the 18th century. 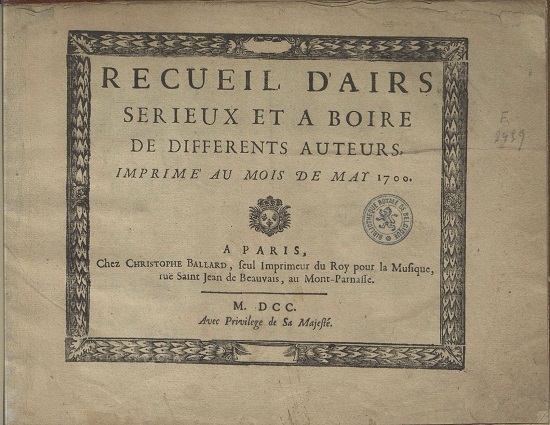 Even though revising the B/I records has been completed, there is still the opportunity to edit and improve them. This is especially important for editions that have not yet been digitized or are especially rare. And in spite of the many overlaps with records from Series A/I (Individual Prints before 1800) there is still a significant number of A/I records, especially from the 17th century, that need to be revised in a similar manner. To say nothing of the records from the 18th century.