The Other Giacomo Puccini 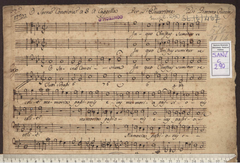 He studied in Bologna and was in correspondence with Padre Martini. After his studies, he returned to his hometown of Lucca and was organist and choir director at the cathedral. As one might expect for someone in his position, he wrote a large number of masses, motets, magnificats, and cantatas. He became a member of the Accademia filarmonica in Bologna in 1743. His musical diaries, entitled Libri delle musiche annue, reveal a lively side of the music and musicians in Lucca from 1748 to 1777.

No printed compositions of his are known. All of his works seem to have been preserved in manuscript form only, and are only found in Italy.

A helpful, but by no means typical, aid to performing Puccini’s music today is the inclusion of durations on many manuscripts (such as RISM ID no. 850638822).