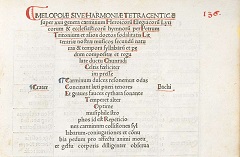 We have received the following from Nicole Schwindt (Chair, RISM Germany):

The turn of the year 2020/2021 marks the 500th anniversary of the death of the first printer to print mensural music with movable type in Germany.

The Augsburg-based printer Erhard Öglin published a music book only six years after the Venetian pioneer Ottaviano Petrucci, and probably independently of him. A representative edition is Melopoiae, in folio format, which appeared in the first half of 1507 and contains odes by Horace (RISM ID no. 990064739). Intended more for the eye than for practical use, this was followed by a small-format edition of these four-part settings for voice shortly thereafter, entitled Harmonie (RISM ID no. 990064740). The humanistically inclined initiators of the edition, Konrad Celtis and Konrad Peutinger, certainly chose Öglin because he was also a skilled type cutter and founder and could thus produce the music types himself.

Five years later, in 1512, Öglin brought another novelty to the book market: the first polyphonic song collection with German words (RISM ID no. 993103852). The publication appeared as four partbooks with woodcuts by Hans Burgkmair and contained secular repertoire from Emperor Maximilian’s court chapel. Within a year he published another collection of songs (RISM ID no. 993114941).

Apart from a few broadsheets, nothing else from the field of music has survived from Öglin’s workshop. Multiple-impression printing was too laborious to be profitable. However, he continued to print in Latin and German, and also published a Hebrew book. He died at the end of 1520 or in January 1521.