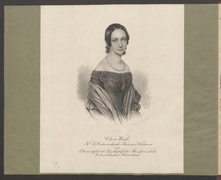 We have received the following from Marina Schieke-Gordienko, Division Head, Music Department, Staatsbibliothek zu Berlin – Preußischer Kulturbesitz. A longer version of this appeared in Bibliotheksmagazin (2/2019).

Clara Wieck-Schumann was probably the most famous pianist of the 19th century, but she was also a composer, editor, piano teacher, and concert agent.

She was born on 13 September 1819 in Leipzig and received excellent piano instruction from her father, the piano teacher Friedrich Wieck. From an early age, concert tours took her to Dresden, Weimar, and Paris. She received her first composition lessons from Heinrich Dorn, Carl Reißiger, and Siegfried Dehn and at the age of ten she published her first piano compositions, the Quatre Polonoises op. 1 and the Caprices en forme de Valse op. 2.

When she met Robert Schumann, a bitter fight began with her father, who was strongly opposed to the marriage plans of the young couple. The marriage took place on 12 September 1840, but only after legal intervention. For Clara, a restless time began. Between 1841 and 1854, she gave birth to eight children. Despite numerous household duties, she succeeded in devoting time to her own concert performances and composing. Most of her works were composed between 1829 and 1855. Her oeuvre comprises 23 works with opus numbers and 31 without, including piano compositions, lieder, choral works, romances for violin and piano, and two concertos for piano and orchestra. Most of her autograph music manuscripts and a comprehensive collection of correspondence are preserved in the Staatsbibliothek zu Berlin – Preußischer Kulturbesitz. They can be searched in the catalogs of Stabikat, RISM, and Kalliope.

Clara increasingly became the main interpreter of the works by her husband, who had to stop performing due to an injury. The Schumanns experienced a brief but happy time in Düsseldorf beginning in 1850, where Robert was appointed city music director. After his death, Clara carried on the legacy of her husband by editing the first Complete Critical Edition of his works for Breitkopf & Härtel (31 volumes, 1879-1887), the Instructive Ausgabe of his piano works with metronome markings and fingerings, and an edition of his early letters in Jugendbriefe (1886). Later, she accepted an appointment as Professor of Piano at the Hoch’sches Konservatorium in Frankfurt am Main. In her 13 years of teaching, she built up an international piano program. Among her ca. 70 students were Fanny Davies, Ilona Eibenschütz, Mary Wurm, Adelina de Lara, and Leonard Borwick. Clara Schumann was a merciless critic of her students’ piano playing when their technique or expression were lacking, which caused others to say of her later that she had “unpleasant manners” (Louise Adolpha Le Beau, Lebenserinnerungen einer Komponistin, Baden-Baden 1910 p. 49. The Le Beau Collection is also housed in the SBB.). But she also was not stingy when it came to praising a performance that she felt was successful. The immortality of Clara Schumann is based in no small part on stories of her aritistry handed down by her students.

The extensive Schumann Collection came to the Royal Library through Clara Schumann, who considered the institution to be a “worthy and safe place” to preserve the autograph manuscripts of her husband (see “Acta betreffend den handschriftlichen Nachlass von Robert Schumann. 1887,” SBB, Handschriftenabteilung, PSB, III H.23, p. 3). The library already held the autograph manuscripts of prominent composers such as Johann Sebastian Bach, Wolfgang Amadeus Mozart, and Ludwig van Beethoven. Robert Schumann’s autograph music manuscripts were first kept in the Manuscripts Department of the Royal Library on deposit, and could be acquired in 1904 thanks to a private foundation. Eighteen volumes formed the core of the Schumann Collection, including three volumes of lieder from 1840-1847, Symphony no. 3 (Rheinische), and also including 28 volumes of family correspondence, which ended up at the Biblioteka Jagiellońska in Kraków after the war, where they are still to be found today. An important addition was made in 1924 when further original manuscripts were acquired from the oldest daughter, Marie Schumann, which included Clara Schumann’s Piano Concerto no. 1 (1836), numerous letters from Johannes Brahms, and correspondence between Robert and Clara Schumann. Finally, in 1940, three household account books (1837-1856) and assorted objects from the Schumann home ended up in the Prussian Library through a grandson, Ferdinand Schumann. Additional material in the Berlin Schumann Collection includes another 13 volumes with autograph music manuscripts by Clara Schumann, seven volumes of correspondence, and the famous Berlin Flower Diary (Berliner Blumentagebuch) containing lovingly arranged plants and leaves for Johannes Brahms from his concert travels with Clara Schumann from 1857 to 1859.

All images are courtesy of Marina Schieke-Gordienko and are from the Staatsbibliothek zu Berlin – Preußischer Kulturbesitz.