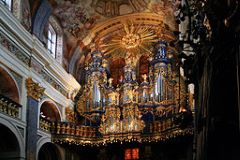 Our Polish contributors at the University of Warsaw have recently finished cataloging the collection of Święta Lipka (Województwo warmińsko-mazurskie), known historically in German as Heiligelinde (East Prussia), which is preserved at the Bobolanum in Warsaw (RISM library siglum: PL-Wb). The descriptions of the sources have now been published in the RISM catalog.

In addition, the RISM records were used to publish a printed catalog. The printed catalog, entitled Musicalia manuscripta Chori Sacro-Lindensis, was published in 2021 in Warsaw and was compiled by Bogna Bohdanowicz and Jolanta Byczkowska-Sztaba and edited by the project leaders Tomasz Jeż and Katarzyna Spurgjasz. The printed version is part of the series Fontes Musicae in Polonia, which was supported with a grant from the Polish Ministry of Science and Higher Education as part of the module Tradition 1a of the National Program for the Development of Humanities (NPDH). The entire project, initiated by Tomasz Jeż and Maciej Jochymczyk at the University of Warsaw, looks at the music repertoire of the Society of Jesus in the Polish-Lithuanian Commonwealth from 1565 to 1773 (see our earlier post here).

The collection reflects the Jesuit music culture of its time on the regional, Central European, and international levels. Composers from German-speaking areas dominate the repertoire, as do the anonymous works, which make up more than a third of the collection. The manuscripts are from the 18th, 19th, and 20th centuries.

A noteworthy part of the collection is made up of copies of works by the Premonstratensian Isfrid Kayser of Upper Swabia, who was brought up at a Jesuit school in Munich. More about this can be read in an article by Jolanta Byczkowska-Sztaba: “Die Werke von Isfrid Kayser im Repertoire der Jesuitenkapelle des Marienheiligtums zu Heiligelinde,” in Oberschwäbische Klostermusik im europäischen Kontext: Alexander Sumski zum 70. Geburtstag (Frankfurt am Main, 2004): 131-143.

RISM users can be pleased to have this extraordinary collection in the RISM catalog. We would like to thank our Polish colleagues for this.