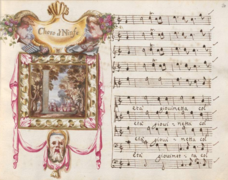 Over 230,000 sources in the RISM online catalog are anonymous and often languish unnoticed. One cantata, however, shows that it is sometimes worth it to leave trusted paths of inquiry: this beautiful manuscript from 1716.

The cantata “Chiuso è già Borea nevoso” was composed during travels undertaken by the young prince in the first half of 1716, when he had just come of age and was thus capable of rule. The music is for a relatively small ensemble: three soloists (the allegorical figures of Primavera, Roma, and Gloria), a chorus (nymphs, heroes, and gladiators), strings, and two flutes and oboes each.

The manuscript is preserved today in the Bavarian State Library in Munich (shelfmark Mus.ms. 225).