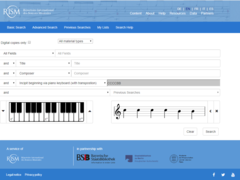 Fifteen musicologists from institutions around the world have come together to argue that singer-songwriter Katy Perry was wrongly convicted of copyright infringement. What is their evidence? Music found in the RISM database, among other things.

In 2019, Perry was ordered to pay $2.8 million when a jury found her guilty of using an ostinato melody in her song “Dark Horse” that was allegedly taken from rapper Flame’s song “Joyful Noise” without permission. The musicologists, who are calling themselves Amici Musicologists, argue in a brief of amicus curiae submitted on 9 January 2020 to the U.S. District Court, Central District of California that the ostinato lacks originality in pitch sequence, rhythm, timbre, and phrase length, and therefore is not protected by copyright law.

The pitch sequence under question consists of the notes CCCCBB (see image; a direct comparison of the ostinatos as used in the two songs is provided in the brief linked above). According to an article published in Billboard, the Amici Musicologists entered this sequence into the RISM database and “found over 2,000 song matches in all keys, most from the 18th and 19th centuries.” The Themefinder.org corpus of public domain melodies was also used to build their argument.

The RISM database contains descriptions of over 1.1 million historic music manuscripts and printed music editions, in sources found in institutions around the world. The music incipit is an encoded field that contains the opening few notes or measures of the source being described. There are over 1.4 million music incipits in the RISM database. Not every record includes an incipit, and many records have more than one incipit.

An incipit search can be done using RISM’s Advanced Search. Either the on-screen piano keyboard or the field Music incipit (with transposition) can be used: Enter CCCCBB and click Search. The results (about 2,300 as of January 2020) are pieces where that note sequence—and its transpositions—occur in the music incipits. The results include musical sources found all over Europe, including Austria, Belgium, the Czech Republic, Germany, Hungary, Italy, Poland, Slovakia, Slovenia, Spain, Switzerland, and the United Kingdom. Composers include Joseph Haydn, Mozart, and Telemann.

According to the Amici Musicologists’ brief, the frequency and dissemination of the pitch sequence as evidenced by results from the RISM catalog and Themefinder show that “the sequence of pitches comprising the ostinato is so trite, and found in myriad pre-existing and public domain works, that it merits no copyright protection whatever.”

Below you can listen to Katy Perry’s and Flame’s songs. You are also invited to browse the 2,300 results for the pitch sequence in RISM and explore the ways that it has been used throughout the centuries.