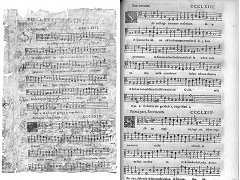 We have received the following from Gottfried Heinz-Kronberger (RISM Germany):

An exciting discovery was made in the course of a scoping study of fragments in the Archives of the Bavarian State. This is not the first gem to be uncovered from the Fragment Collection. In 2018, parts of a sonata for two violins and basso continuo by Johann Caspar Teubner from 1695 were found (BayHStA, Fragmentensammlung Vorl. Nr. 176). In the course of cataloging work, the fragments of the printed music edition discussed here were cataloged by Dr. Sarah Hadry in 2017 and made part of the Fragment Collection. The Bavarian State Library office of RISM Germany was contacted to examine this music more closely.

Originally, the leaves (Fragmentensammlung vorl. Nr. 42) were used as part of the binding in the archival materials cataloged as BayHStA, Oberster Lehenhof 14. These leaves, cut to different sizes, were removed and can now be identified as being part of a printed music edition that contains handwritten annotations. The edition is Orlando di Lasso’s Magnum Opus Musicum, a kind of “complete edition” of the motets of the Munich court chapel master that was published by his sons Ferdinand (ca. 1560-1609) and Rudolph (ca. 1563-1625), printed by Nikolaus Heinrich in 1604 in Munich. The edition plays a major role in Lasso studies in that it was the basis of the motet volumes published as part of the “old” Complete Lasso Edition (1894-1927).

Initial evaluation of the 37 leaves that were found revealed that the fragments are corrected proofs of the Magnum Opus Musicum (RISM ID no. 990036804). This is a spectacular find, because to our knowledge no proofs for music editions from the 16th and 17th centuries have been known to survive until now.

Those who study early printed music editions know that the quality of the books is, for the most part, noticeably high. To be sure, there are errors, not all print shops worked at the same level, and even top workshops occasionally had some gaffes. Despite this, overall one can observe that the printers were masters of their trade. This was reason enough to assume that music books were proofread. After all, time and again clues to this can be found on title pages or in the forewords of the music editions. For example, the title page of the first collection of Newe Teütsche Liedlein mit Fünff Stimmen, published in 1567 by Adam Berg in Munich, says that it was corrected by the composer himself: “Von Orlando di Lassus […] componiert vnd von jm selbst corrigirt.”

The fact that further corrections were carried out once a portion of the print run had been sold can be shown by comparing multiple copies of the same edition. One of the three copies of the Magnum Opus in the Proske Music Department of the Bischöfliche Zentralbibliothek in Regensburg (shelfmark C 117b) contains the same vocal part of the motet “Lauda Hierusalem Dominum” in two partbooks; a different vocal part for this piece is missing, which was noted by one of the edition’s owners, Carl Proske (1794-1861), on a piece of paper (see Musikalische Schätze in Regensburger Bibliotheken, edited by Katelijne Schiltz, Regensburg 2019, p. 164-166). In contrast, two complete copies with shelfmarks 2 Mus.pr. 68 and 2 Mus.pr. 68a in the Bayerische Staatsbibliothek, Munich are correct; the mistake was also corrected in the second Regensburg copy (C 117a), but not in C 117c found in the same library.

It is absolutely sensational that corrections are visible on the proofs. Let us take a closer look at them. 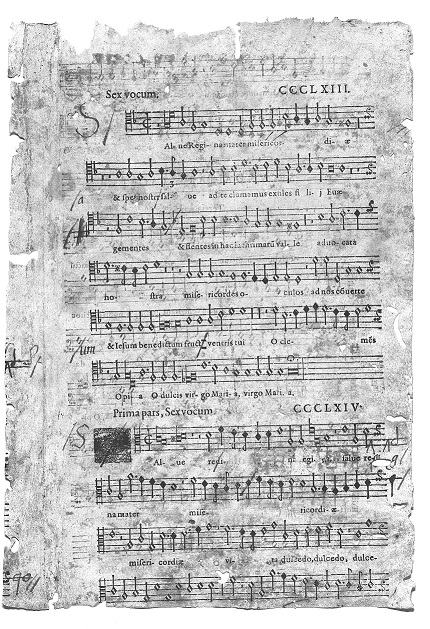 Image 1 shows a variety of errors. In the uppermost line, the initial “S” needed to be added, which was carried out in the corrected version (image 2). But one change desired by the proofreader was not carried through, namely to align the syllables of the word “(mi)-sericor-(diæ)” in the first line with the sung notes. The incorrect “(no)-strr” in the second line was corrected to “(no)-stra.” The proofreader indicated the mistake in a similar way to how it is done today: the error was struck through and corrected in the margin. 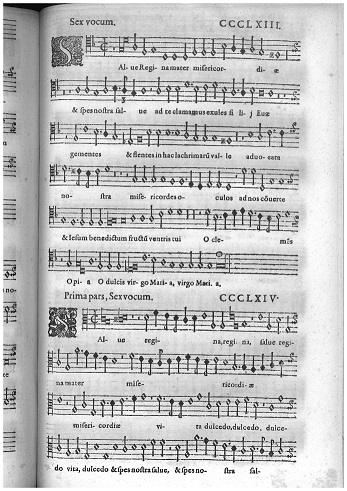 In addition, some notes were corrected. In the third line, a flat sign was placed in the B space on the staff, but it belongs to the next E. To show this, the proofreader extended the two lower lines of the staff on the left-hand side and placed the accidental in the correct space. In the second-to-last line of the first “Salve regina,” the syllable “(fruct)-um” is missing. In the second “Salve regina,” a placeholder was apparently used instead of the initial “S,” to be be replaced by “S.” In the same line, “(re)-di-(na)” was set instead of “(re)-gi-(na)”; the printer mixed up the letters “d” and “g”. And even a note is missing at the end of this line. The proofreader indicated this omission with a caret, once again extended the staff lines, and inserted the missing note–including the syllable “-gi-“ (in “regina”). All of these corrections were implemented with precision.

We do not know who read the proofs. It could have been an employee of Nicolaus Heinrich’s print shop or one of Lasso’s sons. Perhaps multiple proofreaders were active, which would be a reasonable assumption for this edition of unusual proportions: 516 motets for 2, 3, 4, 5, 6, 7, 8, 9, 10 and 12 voices in six volumes (in the old Complete Lasso Edition, it comprises around 2,000 pages of music). But nevertheless, the proofs provide exciting insight into the workshop of a music printer at the beginning of the 17th century. A comparison of the proofs with some of the easily accessible copies of the Magnum opus should provide further insights.