The Thematic Catalogue of the Music Collection of P. Barnabas Weiss

We have received the following from Zuzana Petrášková and Eliška Šedivá (National Library of the Czech Republic):

The latest thematic catalogue in the series “Catalogus artis musicae in Bohemia et Moravia cultae” published to date is dedicated to a collection of music established during the course of the 19th century as the result of the virtually lifelong efforts of Pater Barnabas Weiss, the minister general of the Capuchin Saint Joseph’s Monastery in the New Town of Prague. The founder of the Music Department at the National Library of the Czech Republic, Ladislav Vycpálek, purchased the collection from the Capuchins in 1923.

The lion’s share of the collection is represented by printed music, predominantly from contemporary production of the day. Altogether, the collection includes a number of interesting older specimens, a remarkable range of repertoires and signs pointing to the fact that it was put to practical use. 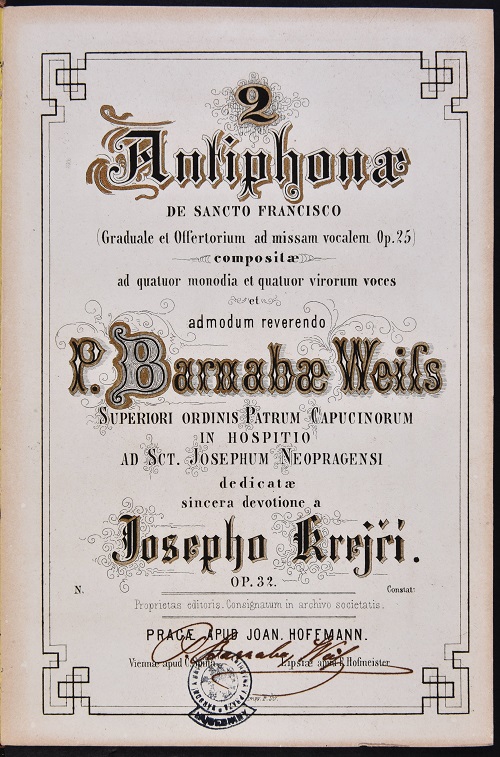 Manuscripts, which can be dated starting from the last quarter of the 18th century up to the end of the 19th century, are fewer in number. Vycpálek separated the printed music from the manuscripts and incorporated it into several already existing shelfmark series in the printed music collection according to the size of the volumes. He then used the music manuscripts from the Weiss collection to establish the Music Department’s manuscript collection.

Unfortunately, this disrupted the collection that had been built up gradually and naturally as a result of Weiss’s personal collecting activities. The music manuscripts later became the subject of further cataloguing and bibliographic processing, namely for the Union Music Catalogue on the one hand and for RISM on the other. It was only during the preparation of this thematic catalogue that it became apparent how the printed music and the manuscripts from the original collection had been collated into a logically constructed unit using thick bindings. That unit is evidence of Pater Barnabas Weiss’s musical taste, interests, performance abilities and overall artistic and organisational efforts. The collection’s structure thus reflects the practical musical activities of a capable amateur musician and the activities of an organiser of the concert life at the monastery church and a collector of period music, especially that published by German and Austrian music publishing houses.

Joannes Nepomucenus Aloysius Carolus Weiss was born in Jihlava in 1815. He graduated from the local grammar school and subsequently entered the Capuchin Order in 1833. The name Barnabas, which he subsequently used throughout his entire life, is therefore his monastic name. From 1834 to 1839, he attended philological, educational and theological courses at the order’s training schools in Znojmo and Brno and he probably also received his musical education there, although unfortunately no specific information about this has been preserved. He was ordained as a priest in Brno after first completing his studies in 1839. He then departed for the order’s Saint Joseph’s Monastery in Prague’s New Town and continued his studies at Charles-Ferdinand University.

After completing his studies, B. Weiss was attached to a number of monasteries in Moravia. In Olomouc, he became established as an active musician, violoncellist and viola player involved in many chamber music ensembles. B. Weiss then spent the following 15 years in aristocratic service as a domestic chaplain and tutor and he did not return to Bohemia until the 1850s. In 1860, he became the minister general at Saint Joseph’s Monastery in Prague, where he remained until his death in 1899.

B. Weiss was a respected personality in social circles. In addition to his pastoral work, he also cultivated music and organised musical performances at the Church of Saint Joseph and directly in the monastery in his capacity as both an expert and a practical musician. He especially organised concerts there that became an important part of Prague’s musical life in the 1860s and 1870s due to their dramaturgy, artistic quality and social impact.

Weiss’s music collection reflects several decades of the musical history and especially the musical life of Prague. It documents an exceptional part of the musical performances in Prague in the second half of the 19th century. In addition to church music performed either directly as part of the liturgy or during spiritual concerts, it also includes another repertoire layer that is consequential due to its scope and significance and involves music for private or salon performances. The selection of the repertoire reflects the aesthetic preferences of the collection’s organiser as well as his interests as a practicing instrumentalist (violoncellist) and singer. Remarks found on the music concern the many musicians whom this collection served over the years.

The manuscript section of the collection is currently being digitised and made accessible to the public in the Manuscriptorium digital library. As an example, see F. X. Brixi’s offertory Scapulis suis, for four vocal parts with accompaniment, in a copy from around 1825 (score, CZ-Pu 59 rm 5, cat. no. 17, RISM ID no. 550503086; see Manuscriptorium - Digital library). 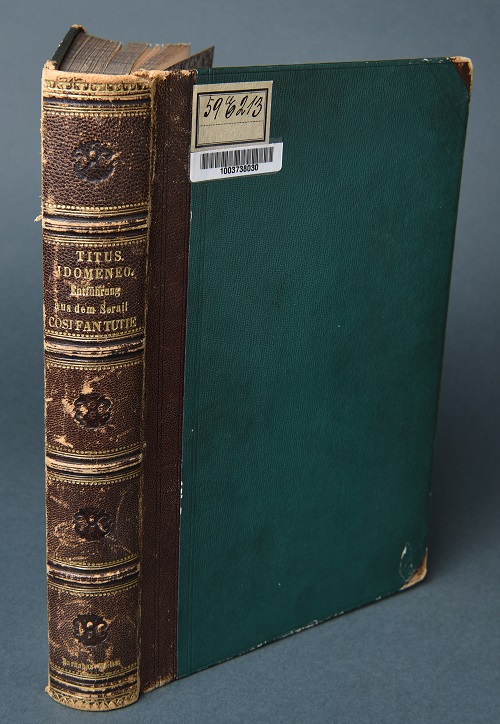 All images courtesy of the authors.