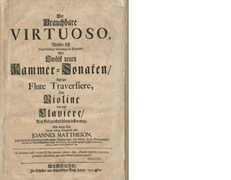 It’s not only numerous composers who are celebrating major anniversaries: compositions are too. When you think of Johann Mattheson, you might first think of his writings that appeared in Hamburg, Der vollkommene Capellmeister (1739) or his Grundlage einer Ehren-Pforte (1740). But this time we’re going to look at the twelve sonatas that were published in Hamburg in 1720. The sonatas were actually finished in 1717 but appeared three years later.

The RISM entry has already been revised and has individual entries for each sonata plus incipits (RISM A/I: M 1400; MM 1400; RISM ID no. 990040091). Take a look at the digitized copy from the Staats- und Universitätsbibliothek Hamburg. The printed edition was entirely set with movable type.

Besides the sonatas themselves, the 14-page preface is very interesting, in which Mattheson refers to the title and explains what a virtuoso actually is and who may use the word to refer to themselves (p. 2). Mattheson was also very aware that musicians have certain vices from time to time and that these also have an influence on their character. These included gorging on food, drunkenness, impertinence, smelling like tobacco, rudeness, uncleanliness, and godlessness, to name just a few of the vices that he found to be especially harmful. The work is dedicated to the Dobbeler brothers, who had received instruction from Mattheson and played under his direction.

As dedications go, Mattheson was also at times more abstract, and we’d like to draw your attention to a different, somewhat older sonata (RISM A/I: M 1396; MM 1396; RISM ID no. 990040087) that was engraved in 1713. It “impresses” (sorry, printing pun) not only on account of its unusual format (you can see it here) but also because of its dedication: “dedicated to the person WHO WILL PLAY IT THE BEST.” The competition is now open.

If you want to know more about the twelve sonatas from 1720, we recommend Jane Ambrose’s article “Notations on Mattheson’s ‘Der Brauchbare Virtuoso’” in Bach: Journal of the Riemenschneider Bach Institute (1986; cited in RISM as AmbroseM 1986).

Don’t be surprised if you hear recordings with different instruments. Mattheson leaves the choice of instruments up to the performers. Here is a version with harpsichord and flute: