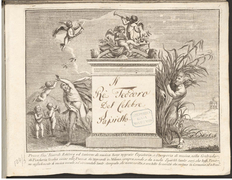 One of the people with a major birthday in 2020 is King Ludwig II of Bavaria, who was born 175 years ago on August 25, 1845. (Here’s a song to celebrate him.) King Ludwig is a figure who probably needs no introduction: his fairy-tale castles belong to the itineraries of many visitors to Bavaria, and his admiration for the music of Richard Wagner made him a major patron of the composer.

As might be expected with a ruler, one finds music in RISM dedicated to the king. Indeed, some of the music Wagner dedicated to Ludwig II is in RISM, including Schott editions of the Ring des Nibelungen and a few autograph pages from Götterdämmerung that may have belonged to King Ludwig.

One striking aspect when you search for King Ludwig in RISM (in the Advanced Search, select Other Names and enter Ludwig II., König von Bayern ) is that Ludwig II was also a music collector. He appears as a previous owner on around 40 music manuscripts in RISM, many of which bear the royal stamp “BIBLIOTHECA REGIA MONACENSIS.” While the RISM records don’t tell us whether King Ludwig selected each of the manuscripts himself (or if he inherited parts of the collection), it is remarkable that a large number are operas and other kinds of stage music, fitting of the king’s taste for the dramatic. Much of his musical library is preserved today in the Bavarian State Library (D-Mbs).

A dozen of the king’s manuscripts have been digitized and can be seen online. Some of the bindings, such as for Johann Simon Mayr’s La Lodoiska, are quite modest: simple paper boards, not the elaborate bindings one might associate with royalty. King Ludwig’s opera collection is heavy on Italian opera, including two excerpts from Rossini operas (La gazza ladra and La pietra del paragone), a full score of Vincenzo Federici’s Castore e Polluce, and Giovanni Paisiello’s one-act opera I pittagorici.

Another interesting Paisiello item in the king’s collection concerns portions of the opera Il re Teodoro in Venezia. The title page (see image) is an engraved passe-partout image in which the name of the opera is simply entered by hand. The imprint indicates that the manuscript was completed by Giovanni Ricordi’s firm in Milan; copying music manuscripts is, after all, how Ricordi got his start. The dating of the manuscript to 1808-1812 places this document at the very beginning of the firm’s history.