Gaetano Brunetti manuscripts online at the Library of Congress 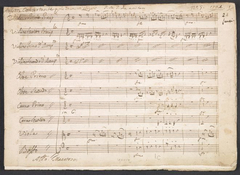 We have received the following from our colleagues at the Library of Congress:

Gaetano Brunetti (1744-1798) was an Italian composer and violinist who moved to Spain as a teenager in 1762, and was a vital contributor in that country’s musical resurgence. Very few of Gaetano Brunetti’s musical works were published during his lifetime and, consequently, they remained virtually unknown for almost two centuries.

The majority of these works are for chamber music; twenty-two are orchestral works and one is a sacred vocal composition with orchestral accompaniment.