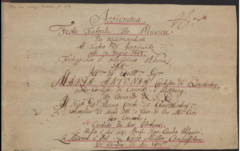 Normally in our series RISM A–Z we focus on just one person at a time. Since there is little information about the only woman composer in RISM whose last name begins with Q (Lucia Quiciani), we will throw the spotlight on several women:

The Italian composer Lucia Quiciani was a pupil of Marco Antonio Negri (died 1624). Her madrigal “Udite lagrimosi spiriti” appeared in his collection Affetti amorosi libro secondo (RISM B/I 1611|16). Sophia Magdalene von Qualen (1749-1844) appears in RISM as the former owner of four sources that are now located in Copenhagen. These include two sonatas for harpsichord and violin, a harpsichord concerto by Andreas Schweinitz, and an extensive collection of piano pieces.

The conductor Eve Queler (born 1936) has conducted over 100 concert opera performances at New York’s Carnegie Hall and has appeared in numerous opera houses worldwide. In RISM, she can be found as the former owner of an autograph manuscript by Giovanni Battista Pergolesi (now in the Library of Congress in Washington, D.C.).

Two female composers from the 17th and 18th centuries who are not (yet) in RISM should also be mentioned:

Rosalba Quinzana (17th century) was a nun, singer, and composer at the convent of St. Redegonda in Milan.

Marie Anne Quinault (1692-1793) was a singer with the Comedie Française and a composer of sacred motets. Her compositions were also performed at court in Versailles.