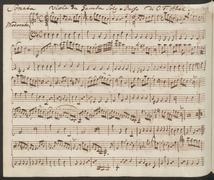 We have received the following from Sonia Wronkowska of RISM Poland:

Two new sources for works by Karl Friedrich Abel (1723-1787) have recently been found by Sonia Wronkowska in Poland, in the library of the Adam Mickiewicz University in Poznań (PL-Pu), originating from the Maltzan family palace in Milicz (formerly Militsch). Count Joachim Carl Maltzan (1733–1817) – Prussian Minister Plenipotentiary in London – was the link between the provincial, then-Prussian town of Militsch and the“Bach-Abel Concerts”. Maltzan probably regularly attended the famous concert series, or he may even have been one of Abel’s noble pupils. He acquired two manuscripts containing 28 works for viola da gamba by Abel in London and later brought them to his hometown to start a viola da gamba-oriented music ensemble.

The Maltzan Manuscript (RISM ID no. 300044500) contains 27 sonatas and duets for viola da gamba by and attributed to Abel, partly in autograph, as well as one sonata by Johann Christian Bach. It is now the most extensive homogeneous manuscript containing Abel’s viola da gamba music. The second manuscript (RISM ID no. 300044529) consists of one sonata by Abel.

The newly discovered pieces provide examples of practices unknown thus far in the transmission of Abel’s work, as well as a whole range of his achievements as a composer: from simple, didactic galant sonatas to more advanced, virtuosic works in the Berlin style which probably reflect the way the composer played himself.

All previously unknown pieces were recently published by Edition Güntersberg.