The conference Documenting Musical Sources in Latin America took place as a peripheral event of the annual congress of the Gesellschaft für Musikforschung (German Society for Music Research) in Mainz.

RISM invited speakers from Latin America to share information about the state of musical sources in their countries.

The exchange of cultural assets - in our case, musical works - between Europe and Latin America is a field of study that is still in its infancy. The state of knowledge was analyzed and key desiderata were identified as part of the conference Vokalpolyphonie zwischen Alter und Neuer Welt: Musikalische Austauschprozesse zwischen Europa und Lateinamerika im 16. und 17. Jahrhundert (Vocal Polyphony between the Old and New World: Processes of Musical Exchange between Europe and Latin America in the Sixteenth and Seventeenth Centuries), which was organized by the Johann Gutenberg-Universität Mainz and took place in June 2015. The considerable transfer of European musical works to Latin America and the associated enormous influence on indigenous musicians and composers are apparent.

More comprehensive exploration is precluded by the fact that to a great extent sources are inadequately cataloged, and even in large libraries processing and cataloging is still in the early stages. At the same time, interest in recognizing music materials as part of cultural heritage has been observed in the past few years in countries such as Brazil, Chile, Cuba, and Mexico. This has led to such materials becoming accessible for research. In order to address this situation, the processes of cataloging sources and exchanging already collected data with the International Inventory of Musical Sources (RISM) should be organized so as to establish the requirements for investigating sources as well as analyzing the means of dissemination and the associated reception of European music. Follow-up projects in cooperation with Latin American research institutions are planned.

At the conference, respected musicologists and librarians from throughout Latin America will report on the current state of describing sources in their countries and the state of research on cultural exchange. In addition, the organizers will discuss continued progress and arrange ways of exchanging data.

Greeting and introduction from the chairs

Themes and goals of the conference 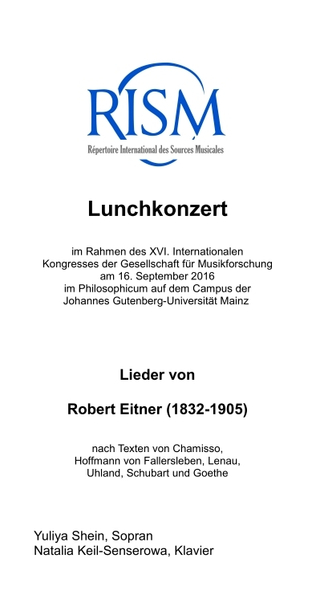 You may also join RISM at the following events at the Gesellschaft für Musikforschung congress:

Christoph Willibald Gluck: Atto d’Orfeo
A concert performance of this opera will be held at the Hochschule für Musik. Free tickets must be reserved in advance by writing: veranstaltungen-musik@uni-mainz.de

Abstract: This presentation is directed at instructors who teach RISM to students–such as part of courses on research methods, musicology, or library skills–as well as users of the online catalog who go beyond simple keyword searches.

The first part of the presentation will give a historical overview of the online catalog and how this history is felt in the current iteration of the catalog. The RISM database has been around since around 1980. Music librarians worldwide contributed to the project with enthusiasm, in particular by sending cards from their card catalogs to the Central Office; in the 1990s, a computer program was distributed to working groups. Over the years, RISM has worked increasingly with independent projects, such as the Opernkatalog and the Hasse project in Dresden and recently the KoFIM project in Berlin. In recent years, data from RISM’s printed book series have been added to the database. As with all large databases, data in the RISM online catalog is very heterogeneous. This should be kept in mind when one does searches, and one should not be satisfied with the first page of results.

The second part of the presentation takes as its basis the recent RISM user study, which provided insights into the search strategies and user expectations of a variety of RISM catalog users. Common questions that people have on how to search, what information is in the catalog, and common mistakes that are made or aspects of the catalog that are overlooked will be discussed. The goal is to help professors better demonstrate the RISM online catalog in interactions with students. User-generated suggestions for the next version of the OPAC will also be described.