It is this manuscript that started it all—or more specifically, the first few bars of the page. The collection of autograph music by Marc-Antoine Charpentier (1643-1704) gathered in a volume known as Mélanges autographes, vol. 10, contains the Te Deum (H. 146), whose opening bars we have been hearing more and more as we count down to the Eurovision Song Contest final on May 22. It has been a meteoric rise for a composer who went from being relatively obscure in the middle of the 20th century to someone whose melody is the official anthem of the European Broadcasting Union (EBU).

In the preface to H. W. Hitchcock’s Charpentier catalog published in 1982, Norbert Dufourcq looks back on the development of Charpentier studies. He observes that after World War II, the dominance of Germanic composers in French scholarship had finally come to an end, paving the way for a full consideration of the composer’s oeuvre. Modern studies on the composer had emerged in the early 20th century, but even in 1945 Claude Crussard’s monograph labeled Charpentier a “forgotten composer”. The post-war period saw fresh scholarship, concerts, recordings, and modern performing editions that brought Charpentier into the light and to the attention of people outside of France.

In 1954, the first 8 (or 16, if you repeat) measures of the Prelude to the Te Deum made their debut as the EBU anthem, heard during a broadcast of a narcissus festival in Switzerland. The anthem also, of course, heralded in the first iteration of the Song Contest two years later. It is still somewhat unclear how the piece came to the attention of the EBU; scholars sometimes point to Lambert’s uncovering of the piece, or maybe it was the BBC, or just a fortuitous discovery. Thomas Betzwieser examined the EBU archives in Geneva but found no discussion of this piece linking it to an EBU decision; he suspects that the selection was made on a national level, which would point the search for relevant documentation to local archives. 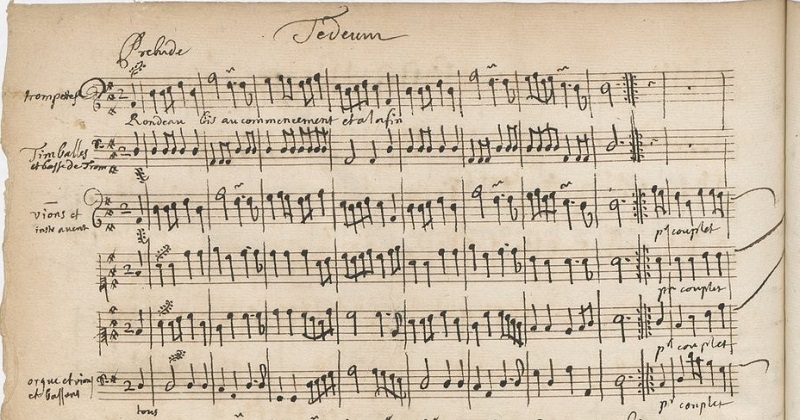 Thanks to the major import of 20,000 records from RISM France last year, the RISM database now has all 28 of Charpentier’s bound Mélanges autographes. Volume 10, containing the Te Deum, includes other motets. Just over half of the volumes can be found online through Gallica.