Légende norvégienne: Unknown work by the Belgian violinist and composer Eugène Ysaÿe at the Royal Library of Belgium 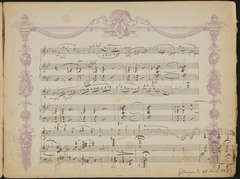 The music collections of the Royal Library of Belgium (B-Br) have been recently enlarged by a previously unknown work by the Belgian violin virtuoso Eugène Ysaÿe (1858-1931), entitled Légende norvégienne, thanks to the acquisition of the autograph score version. In the spring of 1882, Eugène Ysaÿe toured in Norway. During his three-week stay, he composed Légende norvégienne for violin and piano. The score is dated 28 April 1882 and was premiered two days later in Bergen, as mentioned one advertisement in the Bergens Tidende newspaper. In Bergen, Ysaÿe met Edvard Grieg, who dedicated a photograph to him on 1 May 1882, and also gave a concert for the benefit of the Ole Bull Foundation. The score Légende norvégienne, which is played again in Oslo on 14 May 1882, was dedicated to Alexander Bull, violinist and son of the Norwegian violin virtuoso Ole Bull, who had just died two years before in 1880.