New on our Bookshelves: The Basset Horn in Italy 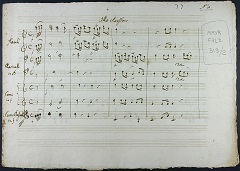 The book’s eight chapters serve as a comprehensive survey, starting with questions of terminology and reaching to a discography. The chapter with quotations about the basset horn range from Francescos Antolini’s La retta maniera di scrivere per il clarinetto from 1813 to Antonio Chiraparin’s Il Clarinetto from 1998. Further chapters concern the distribution of the instrument in Italy in the first half of the 19th century, instrument builders, and the use of the basset horn in the orchestra and banda. In the chapter about basset horn performers, virtuosos are named alongside orchestral musicians and amateur players.

A catalog of works is arranged by scoring, from solo works to concertos for basset horn and orchestra. The RISM database has 37 sources named by Amore. Included here are nine concertos by composers such as Luigi Bortolotti (1776-1856), Johann Simon Mayr (1763-1845), and Giuseppe Neroni (1784-1858). Among the arrangements named by Amore, the ones in RISM are based on operas by Gioachino Rossini (1792-1868).

Two autograph manuscripts have been digitized: a septett and a collection of five sextetts by Johann Simon Mayr.