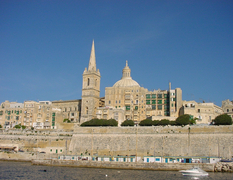 Valletta and Leeuwarden are the two European Capitals of Culture for 2018. Valletta is the smallest capital in the European Union and is listed as a UNESCO World Heritage Site.

The city was built by the Knights of Malta beginning in 1566 and the sights can be reached easily by foot. But as Alexiei Dingli, the mayor of Valletta, said, “This Capital of Culture is different than other cultural capitals. It’s not just about Valletta, but all of Malta and Gozo, too.” Fans of culture can expect a full calendar of events throughout the year.

There aren’t any sources in the RISM catalog from Malta yet…does anyone out there have any leads? Nevertheless, we do have some sources by Maltese composers, and their compositions can be found around the world.

Nicolas Isouard , also Nicolò de Malte (1775, Mosta – 1818, Paris), was a Maltese composer with French roots. He composed over 40 operas that were popular in Paris and elsewhere. This can be seen in the over 200 sources in RISM.

Almost as many sources can be found for Girolamo Abos (1715, Valletta – 1760, Naples). He left Malta at the young age of 10 in order to study music in Naples. Abos spent his life there as a music teacher at different conservatories and was also maestro di cappella at several churches. His sacred and secular works were performed throughout Europe, though to varying degrees of success.

Francesco Azopardi (1748, Mdina – 1809, Rabat) composed ca. 250 works, most of them sacred. Like Abos, he was pulled to Naples and lived there from 1763 to 1774. Then he returned to Malta and became the organist, later the maestro di cappella, at the cathedral in Mdina. Azopardi became famous through his counterpoint and compositional treatise Il musico prattico, which was translated into several languages. One of the numerous editions is in RISM.

Francesco Vincenzo Schira was born in 1809 in Malta but spent most of his life in London, where he died in 1883. Of his many operas, arias, and romances, only a few are still known today.

Michelangelo Vella (1710, Senglea – 1792, Cospicua) received his musical training in — you guessed it — Naples and returned to Malta in 1738 in order to work as as a music teacher, organist, and maestro di cappella. The six sonatas for three violins and bass are among his most popular works and were printed in Paris during his lifetime (RISM A/I: V 1107, VV 1107, VV 1107a).